The new £5million Change4Life campaign includes a ‘Sugar Smart’ app, which allows consumer to scan bar codes of products to reveal how much sugar is in everyday food and drink. The app shows the total sugar amount of each product in both cubes and grams.

For example, an average chocolate bar contains six cubes of sugar, a small carton or pouch of juice drink contains over five cubes and there are nine sugar cubes in a can of cola. Each product takes children up to or over their recommended maximum for the day, which ranges between 19 and 30 grams depending on age.

Further marketing activity includes television, digital and outdoor advertising, and updated web content from today (4 January) across England. Five million ‘Sugar Smart’ packs will also be given away to primary age children and their families via schools, local authorities and retailers, which seek to educate children about hidden sugars using stickers. A nationwide roadshow will take place across 25 locations from 18 January.

Placing sugar at the top of the agenda

In October this year the Commons Health Select committee published a report with recommendations on how the Government should tackle the UK’s obesity crisis, including a ban on junk food ads during family TV show. As a result, Public Health England (PHE)’s director of marketing Sheila Mitchell believes that sugar is “absolutely at the top of the agenda at the moment”.

“This was a great opportunity for the marketing discipline to come in and see how we can reach out to parents by giving them a tool, which is the app, to help them understand how much sugar is in the products that they buy,” she told Marketing Week.

“It’s an educational campaign, but it’s also giving them a tool that will do more than just talk about guidelines. Rather than saying ‘Make these swaps’, which we did in our ‘Sugar Swap’ campaign last year, we had to give people something that they could action easily.”

Besides evaluating different metrics including campaign awareness, social engagement, app downloads and sharing the app’s content, Mitchell is also planning to look at Sugar Smarts wider influence on the market.

“To prove whether the campaign had an effect, we’ll be working with partners such as Kantar and MySupermarket.com to see if it is impacting on category trends, whether people are actually moving away from sugar and how can we correlate those shifts back to the campaign activity,” she explained.

The importance of brands getting involved

Five major supermarkets, including Aldi, Asda and Tesco, have also pledged to support the campaign through educating and helping customers make healthier food choices when shopping. While some retailers will offer in store support or email their customer databases, others will distribute campaign booklets aimed at children at point of sale.

Mitchell explained: “Supermarkets will help us provide new distribution channels for handing out these educational materials. I have to be realistic – we only have certain amounts of money and we are the Government talking to people, but people’s lives are touched on a daily basis by the supermarkets, what they see on TV and what they do digitally.

“A lot of power comes from those messages being delivered through the brands and channels that people recognise and trust. It’s a conscious decision that we pursue the commercial sector.”

A multitude of health campaigns

January will be a busy month for PHE, as it is launching two other health-focused marketing activities, including ‘Dry January’ and an anti-smoking campaign. Yet even though these messages will be sent out to the public at the same time, Mitchell is confident the campaigns can achieve the cut through they need.

“This pains me greatly every summer, where we ask ourselves if we’re launching too many campaigns. Although it sounds as though there are three campaigns coming out at the same time, they have varying levels of spend and are aimed at different audiences,” she added.

“The big one is undoubtedly the sugar campaign, where we have put a total of £5m behind it, while the anti-smoking campaign and Dry January have £1.5m and £100,000 behind them.” 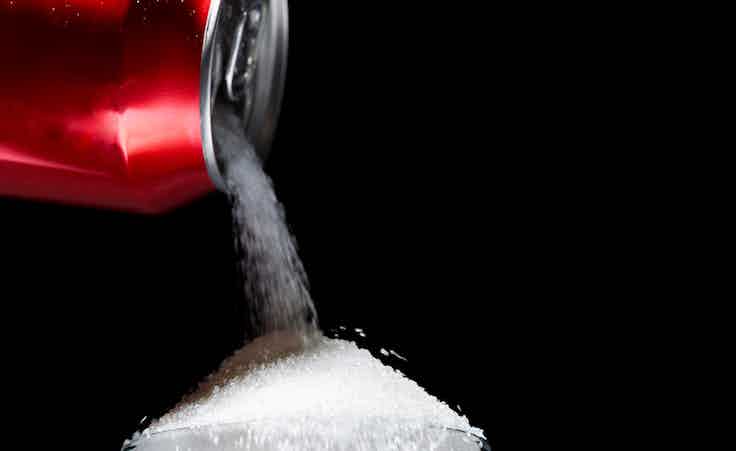 The food and drink industry has rejected calls from Public Health England (PHE) to introduce tighter marketing regulations around sugary products, including the controversial “sugar tax” that would see an increase in the price of high sugar products.

Jamie Oliver has joined forces with Leon to take action on sugary drinks and is urging other brands to do more to improve public health.