Marketing Week (MW): Starwood Hotels opened its first UK property under its Aloft brand at London Excel at the end of October 2011, but given the global economic slowdown, is this a good time to be rolling out a new brand internationally?

Steven Taylor (ST): We are focusing on the emergence of the younger Generation Y [the late teens to mid-20s age group] and the global middle class. The majority of the world’s population is in the middle class and we try not to get distracted by short-term cycles.

MW: What challenges does the sector face?

ST: We regard challenges as opportunities and try not to focus on the economic situation. One incredibly important theme is localism. For instance, we have launched a programme around Chinese visitors called Starwood Personalised Travel in global ‘gateway’ cities like London.

It offers things that matter most to the Chinese guest, including in-room kettles, slippers and translated welcome materials. Restaurant menus will also be made available in Chinese and feature favourites like congee [a rice soup]. You have to make sure you have the elements integrated into the hotel experience that makes customers feel valued.

Brands are no longer a stamp of reliability, they have to have personality.

MW: Can you explain the Aloft proposition and who it is targeting?

ST: Aloft is similar to [upmarket] sister brand W in that it created its own category within the sector – the design-led segment. Aloft is doing the same in the mid-market. 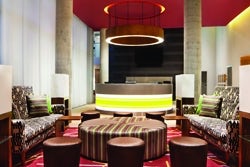 The mid-market targets business travellers, but Aloft is different because it takes a modern, urban influence, is design-led and targets Generation Y. Aloft targets the digital-savvy younger generation.

MW: Where in the world do you expect growth to come from?

ST: Ten years ago, we relied on the US and now it’s the Middle East that’s growing along with China and India. We are expecting 500 million Chinese travellers to emerge.

MW: Why is it important to have a presence in the UK?

ST: The UK is one of the most important outbound markets and we are very interested in growing all of our brands with a footprint here. London Excel [where the first Aloft hotel has opened] has strong forward bookings and is in a fantastic location – it’s 10 minutes from the O2 and the London Olympic park. We are interested in growing across the UK in markets such as Liverpool, Leeds and Manchester.

MW: What are the main marketing channels for Aloft?

ST: Because of who we are targeting we cannot rely on traditional media. Digital media makes up 90% of the marketing budget. Social media has removed the ‘mask’ from our business. With traditional media, you could push messages, but with social media, the hotel experience is very much fed back to consumers who are making their decisions. For instance, we engage people via our own branded websites and have launched a comments and reviews section. We also encourage every general manager to get involved with Tripadvisor.

MW: How is the social media strategy executed? 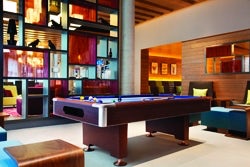 ST: Because we are targeting a younger generation, content creation is very important, which is why we have integrated music very heavily into our marketing campaign. Our 50 Days of Music campaign gave emerging artists the opportunity to play in 50 Aloft hotels globally.

However, a brand cannot just say it has a passion for music – it has to be credible in the space and we felt that we should focus on emerging artists.

We engage through Facebook and other media channels. We have nearly 58,000 social media fans on Facebook. Video is also an important aspect of hospitality marketing; at any event we hold, we have video integrated into our plans.

However, we are careful not to create a ‘social graveyard’ of the kind that I see in a variety of industries where brands start up social media and Facebook pages but then don’t invest the resources in content creators.

MW: What specific approach did you take to promoting the arrival of Aloft in the UK?

ST: We collaborated with people innovating on the cutting edge of other industries like mixologists and a collective of free runners. We got them to perform around the hotel and videoed them. We also worked with music collective Urban Nerds and a street art company called Monorex. We are not just collaborating from a marketing perspective but enhancing the hotel experience.

MW: The Starwood Preferred Guest (SPG) loyalty programme is regarded as an exemplary CRM programme. How do you keep it fresh?

ST: We use the programme to better understand the needs of our frequent travellers, to enhance and personalise their stay. When people stay a certain number of times, they receive benefits such as upgrades. 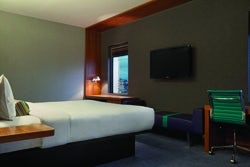 SPG is focused on driving value beyond the travel cycle – we have the SPG Moments programme that can be used to meet celebrities, for example, enjoy a golf challenge with [Scottish golfer] Sam Torrance or get a backstage pass to meet Rihanna at her O2 gigs.

A lot of loyalty programmes focus on transactions, while we focus on experiences. We regularly communicate with members about certain elements of the programme and have an iPhone app, Facebook page and Twitter feed. Travellers of all generations expect to stay connected with brands at all times through a means that suits them. It’s up to us as a loyalty programme to embrace the new channels.

Starwood Hotels and Resorts owns a number of brands operating at the higher end of the market, including St Regis, Westin, Le Méridien and its largest brand Sheraton.

The company introduced the international lifestyle brand W with its ‘whatever/whenever’ service in 1998 and launched the similarly design-led Aloft brand in 2005, with the latter taking an “affordable” positioning.

The company began reducing its own investment in buying property five years ago and now focuses on management and its franchises.

According to the hotel industry’s respected MKG ranking of worldwide hotel groups by number of rooms, Starwood moved up from eighth to seventh with 308,700 rooms as of 1 January 2011. The biggest group by number is IHG with 647,161 rooms.

Starwood won a legal battle with Hilton Hotels Corporation at the end of 2010, after claiming that two former employees took proprietary information to Hilton that helped the latter develop its upmarket Denizen boutique brand.

As part of a legal settlement, Hilton paid $75m (£48.7m) in cash to Starwood and also had to hand over another $75m in hotel management contracts. Hilton was banned from developing any lifestyle brands for two years, giving Starwood the opportunity to forge ahead in the sector.

Read the cover feature to find out why embracing creativity will be your most powerful strategy in 2012 BT embraced creative thinking with their drive to recruit ex-soldiers, read about the strategy here Senior vice-president of marketing at Unilever, Marc Mathieu, tells us about how the company embraces creative thinking Nicola Mendelsohn, Partner at Marketing […] 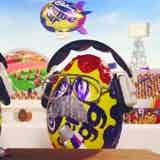 Cadbury is using the seasonal launch of its Crème Eggs to begin its first Olympic sponsorship activity of 2012.