The new value brands will include 76 new lines split equally across fresh produce and meat and poultry, and all existing ‘Everyday Value’ branded items within the seven categories will be switched over.

There will be a particular focus on drawing shoppers away from the likes of Aldi. For example, Tesco’s Boswell Farms-branded beef mince is priced £1.69, the same price as the German discounter’s Ashfield Farm beef mince.

A Tesco spokesman says: “Over the last 18 months we have been simplifying our ranges, launched Brand Guarantee and improved customer service.

“However, we know customers want the convenience of getting all their shopping in one place. These seven new brands, which are exclusive to Tesco, address our customers’ needs for quality fresh food, at very competitive prices in a single shop.”

He explains: “Tesco are giving the market yet another reason not to shop at Aldi and it’s a major brand repositioning that says why go there for cheaper veg? Ours is the same price and is better quality.”

Tesco has previously attempted to create its own brands under its ‘Venture brands’ programme. Previous Tesco boss Philip Clarke launched brands including Chokablok aimed at taking on popular FMCG brands such as Ben & Jerry’s.

However, McCarthy is keen to separate the creation of the seven new brands from the work it did under previous management.

“There is no connection here to Venture. Tesco is simply showing leadership and this is another brick in a well-thought-out turnaround plan,” he adds. “This isn’t about creating risky new brands, it is about improving some of Tesco’s highest selling produce lines and that isn’t really a risk is it?”

Ray Gaul, VP of research and analytics at Kantar Retail, says the new brands’ link to farming is a smart move.

“I like that it’s connected to farmers, it subconsciously gives that link to provenance and that’s something the Tesco brand really needs [after all the scandals],” he explains.

Earlier this year Tesco was found guilty of delaying payments to suppliers by supermarket ombudsman Christine Tacon, while less than three years ago it was embroiled in the horsemeat scandal.

However, Gaul doesn’t believe the own-label overhaul will be enough to stop Aldi and Lidl from tempting Tesco shoppers away. Recent Kantar data showed that the rate of Tesco’s sales decline has slowed to 0.8 per cent over the last 12 weeks as shoppers returned to its stores. In comparison, Aldi and Lidl continue to experience double-digit growth and now have a combined grocery market share of 8.5%.

“Tesco is trying to find the silver bullet across all its shopping channels to compete with Aldi. New value items like this will change the pattern to an extent but they won’t completely stop people from doing top-up shops. It isn’t enough,” says Gaul.

He believes Tesco will have to focus not only on adding new value-led ranges but also restructuring its marketing around the idea of consumers doing one big shop.

Gaul concludes: “If you go on the Aldi website right now there are aggressive messages trying to get consumers into stores at every turn. You go to their homepage and the first thing you see is ‘New in this week – hot cross buns’.

“That’s a big statement to getting shoppers through the door. Tesco needs to focus all of its messaging in actually getting people into stores. This is a big step but more needs to be done to match Aldi’s aggressiveness.” 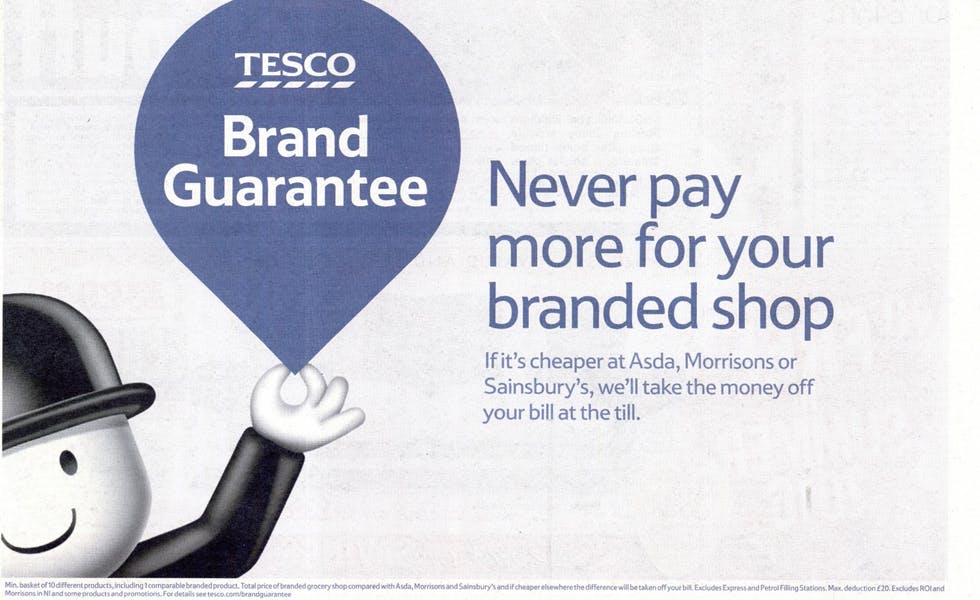 A Tesco ‘Brand Guarantee’ ad that stated customers would “Never pay more” for their branded shop has been banned by the ASA for being ‘misleading’ and ‘unclear’. But while Tesco has since made changes to its print ads it has decided not to alter its price match scheme.