The issue of trust is climbing the corporate agenda. Just last week The Co-operative Bank detailed a rescue plan to plug the £1.5bn hole in its finances and launched advertising aiming to keep the trust of customers, which stated: ’ethical banking has always been in our DNA’. Chief executive Euan Sutherland says The Co-operative Group will still have a significant ethical influence over the direction of the bank despite now owning just 30 per cent of it, while private investors own the remaining 70 per cent.

Meanwhile, payday loans company Wonga is currently running video ‘portraits’ of its customers. These have helped put its point across and attempted to exemplify the trust people have in its products during a select committee hearing on lenders last week, which called for ads to be banned on children’s TV channels.

Gaining consumers’ trust is the ultimate accolade as it can create loyalty and advocacy, and new research reveals the reasoning behind trust issues and suggests what brands need to do to get it.

The study, by Saatchi & Saatchi, is based on research with more than 300 mothers and suggests a step-by-step approach to being trustworth. These include dependability, having a shared agenda, reciprocity – whereby the brand trusts its consumers and vice versa – and sacrifice.

Almost three-quarters (71 per cent) of respondents to the Saatchi study agree that ‘it is easier to trust a brand if it has a wider purpose or agenda beyond selling its products’ and 80 per cent agree or strongly agree that ‘people who behave in ways I expect them to behave seem more trustworthy than those who don’t’.

Procter & Gamble (P&G), for example, has various longstanding campaigns that come under the ‘wider purpose’ umbrella. Pampers has a tie-up with Unicef (pictured above); Gillette works with men’s health charity Movember; and Tampax and Always support the Protecting Futures programme that  helps provide puberty education and feminine protection in developing countries.

Now in its eighth year, the partnership between Pampers and Unicef has seen the brand donate funds for vaccines to protect more than 100 million women from maternal and neo-natal tetanus, and has helped to eliminate it in 10 countries – with the overall aim of eliminating it globally.

“Articulating a brand’s purpose beyond sales is crucial – it’s what sets us apart from own-label,” says P&G UK & Ireland communications director Aimee Goldsmith. “Brand trust has to start and end with product performance. It’s  fundamental that if we want to help get consumers to trust us as brands – and the broader brand in terms of P&G – we start with product performance.

“However, beyond that rational and practical test there’s a massive opportunity for us to secure stronger trust and loyalty, and even advocacy, by communicating what our brand stands for – the character and the values it embodies.”

Other brands rely on trust as the foundation for their whole  business model. Review site TripAdvisor says it is important that the opinions on its site accurately reflect  experiences.

TripAdvisor vice-president of global communications Desiree Fish says: “We have seen through research that the majority of people who have read reviews and read the content on the site have experiences true to what the TripAdvisor community has told them. A lot of that is building loyalty in having people come back, so loyalty is the best measure of trust for us.”

American Express announced a tie-up with TripAdvisor in October, which allows its card members to post American Express-badged reviews, see personalised recommendations of hotels and restaurants based on other members’ purchase data and attach rewards to their cards from a hub on the TripAdvisor site, which are then credited to their account when they take up the offer.

The partnership, which is running in the UK, US and Australia, relies on spend data from American Express card members which is then used to verify reviews. This in turn aims to create a level of trust for card members by adding validity to reviews, providing a service and rewarding the use of data through the loyalty aspect of the scheme.

Stacy Gratz, vice-president of digital partnerships and development at American Express, says: “With a programme like this, everything sits within an American Express environment so the card member knows their data is protected.”

The partnership also creates trust for TripAdvisor users who benefit from seeing verified reviews and an increase in the volume of reviews .

It will come as no surprise that the number one concern for consumers relates to the collection and use of personal data. According to research from Boston Consulting Group (BCG) released last week (6 November), 75 per cent of the 10,000 people it surveyed internationally said privacy of personal data was their top issue. This sentiment applies regardless of age – it is the usage and stewardship of data that matters.

Respondents in all the countries, both developed and developing, consider credit card information and financial data to be the most sensitive. More than 85 per cent of consumers in most developed countries consider this information to be moderately or extremely private.

Gratz says: “We are a financial services company so it is important for us that our card member data is always protected and that we provide members with secure experiences.”

The research shows that the least sensitive types of data include name, age, and gender information, as well as information relating to consumer needs, brand preferences and frustrations with – and feedback about – products and services.

BCG believes these results suggest that consumers are comfortable with the many uses to which this information is already being put and they get more benefit from revealing it, through improved products and better access to deals and promotions, than from withholding it. Crucially, it suggests that those companies that people trust should be able to increase the amount of consumer data they can access by at least five to ten times in most countries.

The research shows that 54 per cent of consumers would be comfortable with the use of information about them if they believed this would not embarrass them, damage their interests or otherwise harm them.

People are twice as concerned about the practices of financial institutions, social media and search engine companies, and government entities than they are about the branded manufacturers, carmakers, airlines, hotels, cable providers, and retailers that offer loyalty cards.

Creating and maintaining a consistent experience also builds trust. Ebay’s auction site, for example, relies on a different type of trust between the buyer and seller, and between the seller and eBay itself.

To keep the trust in its service alive, it has introduced a number of initiatives over the years, including a money-back guarantee called buyer protection, feedback and detailed seller ratings based on a starring system.

While Heywood says that trust has improved he also points out that buyers’ expectations have improved too.

“We used to think of a despatch time of a week as being pretty prompt, but now people expect delivery the next day,” he says. “Trust has improved, but sellers have been on that journey with us. Sellers are the cornerstone of eBay’s business and they have to deliver great service.”

The underlying idea is that consumers are the driving force in terms of what brands need to do to achieve trust. A marketer needs to be considered, appropriate and consistent rather than run a standalone campaign or add-on.

Dependability is about the service brands provide. To build trust, a brand must do what it says it’s going to, and do this consistently. Some 80 per cent of the mothers surveyed agree or strongly agree that ‘people who behave in ways I expect them to behave seem more trustworthy than those who don’t’.

Shared agenda Corporate reputation and a brand’s purpose should resonate with people who want to believe in the brands they use. They trust organisations that have a higher goal than simply making sales.

Reciprocity in terms of trust is about creating a ‘two-way street’ – 78 per cent of the mothers in the research agree that ‘people that demonstrate they trust me make me feel they are more trustworthy’. For example, Barclays used to chain the pens in its branches to the counter, suggesting it did not trust people not to steal them. Now it gives away branded pens – a simple way of showing consumers it trusts them.

Sacrifice is when a brand is willing to build long-term relationships and therefore trust, rather than achieve a short-term gain. For example, when Orange bought the media spots before films are shown it passed up a commercial opportunity, using them in an entertaining way for its ‘Orange Film Board’ campaign encouraging people to turn their phones off, rather than selling its products. 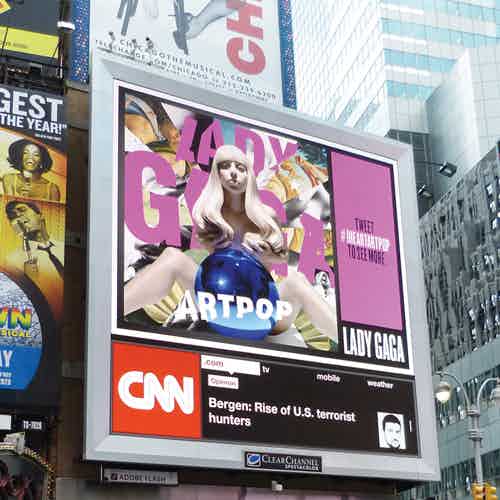 If Lady Gaga can use outdoor to unveil her latest album, it must be the medium of the moment. Digital screens with new technologies have brands flocking to them to engage consumers – but there’s a strong showing from static sites too.