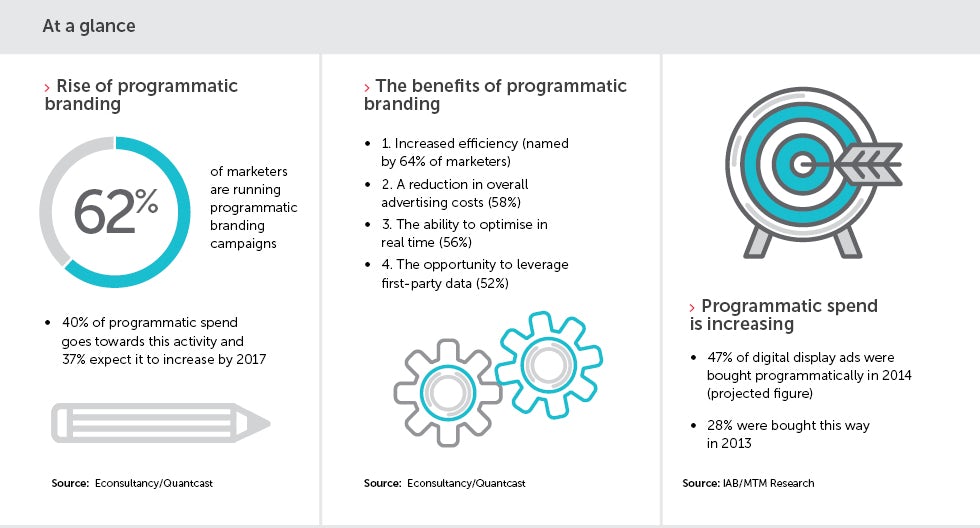 When programmatic advertising took the media industry by storm, many marketers feared it was a death knell for creativity. But as the landscape matures, the parameters for creativity are changing.

Merely because ads are bought and sold using automated systems and processes such as real-time bidding, imagination does not have to take a back seat. Instead, innovative brands and their agency partners are using the immediacy of the medium and the insight it delivers to build brand awareness in ever more creative ways.

Director of international marketing at American Airlines Stephen Davis suggests one such example is to deliver a series of messages over programmatically bought ad positions that build to tell a wider story.

The airline is one of the first brands to trial the services of The Pangaea Alliance, a private marketplace set up by premium publishers including The Guardian, Financial Times, Reuters, CNN International and The Economist, which allows brands to access its combined global audience of 110 million people using programmatic technology.

“It gives us one point of access and we can utilise first-party audience data, which makes it more targeted,” says Davis. “We are also able to serve the creative sequentially, so a business
flyer, which is our core target audience, may initially be served a message about the [‘lie flat’ seats on our new aircraft], but the next time they could see an ad about our entertainment system, so not only do we have the ability to be efficient but also effective.”

This is the first time the airline has used programmatic buying for raising brand awareness having previously focused purely on direct response activity. “Programmatic can really help us in terms of the analytics,” he says. “We will learn a lot from this campaign, which will help us evolve what our next campaign will look like.”

A poll by media company AOL last year revealed that 47% of agencies, publishers and brands believe programmatic is leading to new forms of creativity and storytelling in advertising, and nearly half (48%) reckon programmatic is actually having a positive effect on creativity rather than crushing it.

For DIY retailer B&Q, the weather can have a big effect on what people want to purchase. If it is hot, barbecues and outdoor furniture take precedence but if it is wet and windy, shoppers
will be looking for different products, so timing and message are essential.

B&Q’s research suggests that alongside anticipated changes to consumers’ purchase behaviour in the summer and winter, unexpected weather conditions such as strong winds, snow and extreme cold have a real impact, so it needs to engage shoppers with carefully chosen creative during these times to highlight products and services that might be useful.

Working with Infectious Media, the retailer integrated a real-time weather feed into the programmatic platform, which takes into account past, current and predicted weather in the UK and makes it actionable. This data was then combined with geo-targeting information, which enabled the brand to deliver ads featuring regional weather messages, such as ‘strong winds are forecast for you’, in real time and at scale.

“Weather is a hot topic at B&Q,” says digital marketing manager Vicky Garfitt. “This programmatic activity has allowed us to demonstrate how data can be used to really advance our marketing efforts.”

She claims the campaign has also created a “fundamental shift” in how the business approaches this type of activity, “not just in terms of media efficiency and relevance but also by helping to change internal perceptions”.

B&Q is expanding the scope of the campaign to take advantage of the opportunities provided by this type of enhanced targeting and the ability to use it more creatively.

Nestlé has also recently embarked on a programmatic branding campaign, which ran alongside TV ads to raise the profile of its Dolce Gusto coffee machines and drive sales.

It worked with digital agency Jellyfish and Google’s subsidiary DoubleClick to deliver the campaign, with 91% of ads reaching new visitors and viewability 21 percentage points higher than IAB standards.

Research published by Marketing Week’s sister brand Econsultancy and ad technology firm Quantcast last month supports the assertion that marketers are increasingly using programmatic advertising for branding campaigns and to drive engagement at the top of the sales funnel rather than simply for direct response.

The Programmatic Branding report suggests that 62% of marketers are running programmatic campaigns designed with branding objectives in mind. On average, 40% of spend is going towards this activity and 37% expect spend on programmatic to increase by 2017.

Just over half (53%) agree that effective attribution of sales and conversions to specific ads and marketing creative is going to  be the key to further investment in programmatic branding, while 49% believe programmatic advertising is ready to achieve the scale necessary for brand marketing.

The biggest advantage of programmatic branding, according to 64 of the 100 marketers surveyed, is increased efficiency, followed by a reduction in overall advertising costs (58%), the ability to optimise in real time (56%) and the opportunity to use first-party data (52%).

The rise of private marketplaces such as The Pangaea Alliance  will help encourage brands to shift focus from direct response to branding as American Airlines has done, says Tim Gentry, global revenue director at Guardian News & Media.

Gentry says that when launching the marketplace, in addition to making the process for buying premium inventory simpler, the ambition was to develop new types of creativity and innovation, particularly through the creation of bespoke ad formats.

“It is opening up the capacity to do things like video within rich media in a way that is effective yet tasteful and appropriate for high-quality brands in high-quality environments,” he says.

He is also keen to explore the opportunity of combining branded content programmes such as Guardian Labs and The Economist Intelligence Unit with the targeting and first-party data that The Pangaea Alliance offers to unearth more creative opportunities.

It is something the media business has already trialled by linking up Guardian Labs and its publisher trading desk Guardian Response+.

“We have taken a series of videos and mined the data available  on the kinds of audiences spending time with [the content] on the home site and then we’ve used rich media units to deliver it programmatically to the right sorts of audiences for that campaign,” he explains. “That’s where there are new forms of creativity that programmatic can open up.”

Although he cannot name specific brands, he says a tech business and an upmarket packaged goods brand have recently achieved engagement rates “nudging 5% and hundreds of thousands of views per video”.

The Weather Channel’s global programmatic and yield director Barbara Agus says she can understand why many brands may believe that creativity must be sacrificed in order to maximise efficiency, and admits that it can be “tricky to deliver on both counts at the moment.”

“Isn’t our job to continue pushing the boundaries?” she adds. “It’s an ‘agile’ industry by nature so our premium sales teams should be focusing on holistic, tailored, experiential solutions and bringing creative teams in early in order to deliver highly relevant, contextual and beautifully creative ad messages through the machines.”

Agus says the future for creativity in an automated ad buying world is ‘native programmatic’, because while native advertising – where content produced by brands appears alongside media owners’ own content – is a “great opportunity” for brands, she believes the current approach is not scalable.

“Most executions involve custom work by advertiser and publisher teams and they are slow and costly. So let’s experiment, let’s test and trial,” she says. “There is an opportunity for the ecosystem to embrace some of the new IAB native standards for real-time bidding, which allows buyers and sellers to assemble clouds of creative assets in real time to fit better into user experiences, which in turn should lead to better performance and experiences.”

Gentry at Guardian News & Media believes programmatic data will increasingly be used not just retrospectively in order to place ads, but strategically in the planning stage too. “Programmatic clearly uncovers a huge wealth of data in terms of audience insights, so there is a really interesting opportunity to see how that could play a role in the planning process. It’s something people are talking about but it’s still early days,” he says.

“Rather than those insights purely playing an optimisation role, which they predominantly are now, could they start recirculating further up the decision-making process and begin to influence planning?”

By doing this Gentry suggests that, for example, brands could uncover that a product they thought would be perfect for sports fans could actually resonate better with people interested in film, so marketers could proactively target their ads accordingly.

Davis at American Airlines agrees that they have only just scratched the surface of what programmatic can offer.

“Takeovers [of web pages] aren’t something you can buy programmatically at the moment, neither are things like in-app interstitial tablet placements [where ads appear as users navigate an app], so in order to make the most of programmatic we have got to think about how we use the data in order to make  a bigger splash, using the messaging and placements together,” he says.

If programmatic actually works and connects the worlds of social, digital and traditional media, we have a potential solution for what ails marketers worldwide.