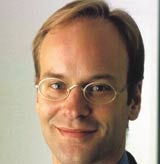 The relationship between the creative and the media industries is not working as well as it could. This is partly because media has become divorced from the creative process, having packed its bags and walked out of the full-service agencies.

The reasons for it departure are well rehearsed: clients believed they could only get an unbiased perspective from an independent; large agency buying clout was believed to be better than small; and the complexity of the media landscape required specialists, which in turn required volume. Oh, and the fact that media departments got fed up with only getting three minutes at the end of every agency presentation.

But what was not so well rehearsed was what would happen further down the line.

Media planning and creative work are now often done in splendid isolation, with neither party understanding the bigger picture. The risk of this is that campaigns will become less effective because media may be bought that only pays lip-service to the creative idea. On the other hand, innovative media opportunities could be missed by focusing on the creative work.

If this happens, the result will be that advertising is viewed as less effective, and its budget will be cut.

Agencies have made their divided beds and will have to lie on them for the foreseeable future. What’s needed is a third party to step in and replenish the passion we have lost for the creative use of media. And who better than the media owners who also stand to lose from advertising cuts?

Some of the more enlightened media players are already doing this through the Institute of Practitioners in Advertising, for example with the IPA Creative Media Showcase, where major figures from the agency and media-owner world explain to packed auditoria how to get the most from their medium. But it needs much more than this.

Media owners have traditionally had a media sales department that deals with the numbers and the sales negotiations, and another department called client services that talks to the clients about future opportunities.

But forward-thinking media owners should create another department (I recommend a working title of creative media counselling) that explains to those in the communications industry how its medium works, the relationship the editors or station controllers are trying to create with their consumers, what kind of creative treatment best exploits this direction and the exciting new creative opportunities in the medium.

Those of us in the creative agencies miss the media department now it’s gone. We respect what it can bring, we’re sorry and we’ve changed our ways. (And we’re hearing whispers that many in the media agencies would like to return to the fold too, but that right now it’s a bit awkward.)

So, how about it, forward-thinking media owners?

In the old days, it was easy: advertisers lied, and newspapers told the truth. But then along came the ASA – and some less-than rigorous editors. By Torin Douglas Which has greater credibility, advertising or editorial? Twenty-five years ago, when Marketing Week was launched, it was no contest. In the Seventies, advertising was widely distrusted […]

As a member of the Direct Selling Association, I received the Trading Standards Institute’s (TSI) recent call to ban doorstep cold calling with trepidation. Direct marketing is often criticised when reports of overbearing salesmen prompt consumers to question all forms of cold calling. A clear distinction needs to be made by our industry between this […]

…ITV1 is understood to be considering moving News at Ten to a 10.30pm fixed slot.