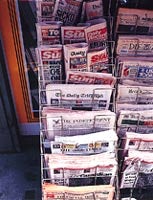 The Telegraph Group is ending its long-standing relationship with creative agency J Walter Thompson (MW last week). Given the economic climate, is this the right time to rock a steady ship?

The Daily Telegraph is still the market leader in the broadsheet sector, selling more than 1 million copies a day (300,000 ahead of nearest rival The Times) while circulation in September was up 2.2 per cent on the previous month.

However, overall Telegraph sales from April to September 2001 were 0.59 per cent lower than in the same period last year. The paper has attracted new readers in the past month, but not as quickly as some of its competitors, and 308,000 of its 1 million-plus sales are subscriptions at less than the 50p newsstand price.

Like its rivals, the Telegraph has seen a weakening in Monday-to-Friday circulation, set against big sales at the weekend. But the paper has unique problems. The perception – if not the reality – is that the paper has an ageing readership at a time when youth is the magnetic North of the advertising compass. Its politics, which reflect those of the owner and editor, are also seen as being politically out-of-touch, backing Iain Duncan Smith for the Conservative leadership when Ken Clarke was more popular among the general public.

The question is whether a change in advertising agency will go any way towards tackling these issues. Telegraph Group marketing director Mark Dixon stresses that the move from JWT after eight and half years will bring changes “more in terms of creativity than strategy”.

This suggests that television will remain the main prop of the marketing drive. Dixon confirms that TV will stay the principal medium, although radio may feature more prominently. The overall budget will be “slightly down” on this year – according to Nielsen MMS, in the year to June the Daily Telegraph spent about &£7m, more than any other broadsheet.

Over the past two years Telegraph advertising campaigns have mainly been promotionand branding-led. This contrasts with the strategy adopted by The Guardian, which leans away from branding. Guardian deputy marketing director Alison Hall says: “We focus on content; it’s all about showcasing different editorial sections, such as The Guide or The Editor.”

The Guardian recorded a 13.44 per cent circulation increase between August and September. Hall says it usually sees a disproportionate readership rise when there is big news such as a budget or disaster.

She adds that younger, non-regular newspaper purchasers are likely to turn to a product with a more youthful tone or with an alternative view to the mainstream when they do want news.

Dixon champions TV as an advertising medium, saying it gives “reach and immediacy” when highlighting a promotion or an editorial innovation. He also believes radio has credibility but that outdoor is only suitable for brand-building. The Guardian prefers to use a mixture of media, with outdoor being used for long-term campaigns while TV, radio and print are used more sparingly.

Dixon does not believe in a radical overhaul but is all for “tinkering with the product” to add “another core of younger readers” to the long-standing loyal readership. New editorial elements, such as increased music, film and sports coverage, are likely to appeal to a younger readership. Dixon also points to the success of the paper’s Telegraph Fantasy Football game, which has signed up 270,000 readers with an average age of 32.

The Daily Telegraph has made some efforts to draw in a younger readership. It sponsored the Knebworth 01 dance event, and has carried promotional CDs featuring rock bands Ash and the Charlatans.

Media analyst Lorna Tilbian of Numis says that the challenge is to hang on to readers brought on board by subscription offers and promotions. She feels that the paper has a strong brand and is well placed to maintain ad rates and keep a good share of the advertising market.

Price and subscriptions are sensitive issues, and none of the papers approached were willing to reveal their strategies to competitors. The Telegraph costs 50p at the newsstand, while The Times weekday edition went up from 35p to 40p in June. The Guardian increased its cover price to 50p recently. These price changes may well reflect a loss of revenue from advertising.

Dixon says that, since the price wars of the early Nineties, “the whole industry has been vastly underselling a fantastic product. At 50p I think it is still undervalued.”

The Telegraph is part of Conrad Black’s media empire Hollinger International, which last year began divesting itself of smaller papers in other territories and announced more investment in new media.

Hollinger International deputy chairman and chief executive Dan Colson says the disposals leave the company well positioned to ride out the global recession. He adds that the group’s strategy is to wait and see how the world market develops. If a good prospect appears, the company may dip into its coffers but, on the whole, now is not “the best time to be reaching for the cheque books” and no, the Telegraph Group is not for sale.

Diageo is planning to launch ready-to-drink (RTD) brands in the UK that have been tested in other countries. This forms part of its strategy to use RTDs to drive growth. While its most successful RTD brand, Smirnoff Ice, is sold in 15 countries, other RTDs – such as J&B Twist, a blend of whisky and […]

Single people have a tough time finding a partner. Ugly single people have it especially hard (as the Diary well knows). But Match.com says it has found a way to relieve their misery. The online dating service has organised a “lurve cruise” for London singletons, to take place on bonfire night. But in a rather […]