The amount women in their fifties spend on clothes is nearly £7bn and rising, but they are much more diverse than younger shoppers, requiring a distinct marketing tack.

It is a criticism often levelled at fashion brands that their marketing communications are overwhelmingly skewed towards the younger end of the market. Yet research by Kantar Worldpanel suggests that it is an older generation that is driving growth in womenswear. Will this mean that marketers should be making overtures to this otherwise seemingly neglected demographic?

The over 50s contribute £300bn to the UK economy annually, according to Age UK figures from this month; Saga notes that the age group accounts for almost half of UK incomes, for example. It is clear that this segment, while affected by the financial crisis like other segments, has money to spend.

Younger women are worth more overall to the market, spending £9.6bn in 2013 but that figure is down 1.3 per cent on 2012. However, targeting the over 50s segment will be tricky for marketers because of the diversity in attitudes, says Kantar Worldpanel’s head of fashion Ian Mitchell.

“You need to put the term older in inverted commas. We’ve been looking at the 50+ age group but it doesn’t mean that under 50s do one thing and the over 50s another.

”Women in their 40s and 50s on either side of the divide are not too different. Perhaps there are differences in lifestage or circumstances but in terms of attitude and how they define themselves, there isn’t a sudden change.”

That said, Mitchell adds that women aged 45 to 55 are spending more on themselves. “Marketers need to ask how they can tap into that age group. If you take the top 10 womenswear retailers and look at those who are growing, they are doing so because the 50+ market is influencing it.”

The increase in dress volumes is not due to a particular personality type but indicative of a wider learning for marketers. “The over 50s are spending more on dresses but it’s a reflection of what’s on trend. In determining the product mix in the wardrobe by age, there is nothing that remarkable about the age group,” Mitchell says.

“While there is a correlation between style preference and age, overall womenswear is about fashion attitude. Different customer groups have different tendencies, so one wants flattering clothes that follow fashion, another is keen to avoid looking like their mother,” explains Lee Pinnington, multichannel marketing director at Matalan.

Daryl Humphreys, head of marketing for BHS, explains why the retailer believes targeting specifically to a customer’s age is no longer an appropriate strategy, regardless of a single segment’s growth pattern: “We believe that it is more about attitude and lifestyle than age.

“The traditional age barriers are blurred and the belief is that customers of all ages are confident about fashion. Clever retailers are quickly adapting mainstream trends to all ages. There is more awareness about how to style yourself and that gives people confidence to be fashion-driven.”

One emerging trend is that the over 50s want value from every purchase. Nearly half of all their fashion spend (42 per cent) is on discounted items.

“The older you are, the more care and consideration you take in buying items,” Mitchell notes. “We were looking at Primark’s growth and a lot of it is coming from the older group.” 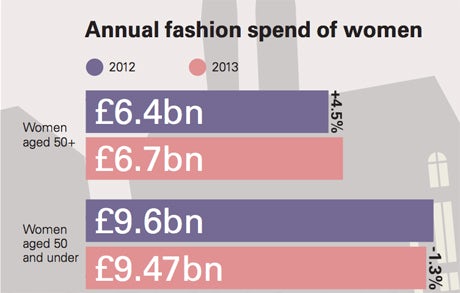 However, the study finds that while the over 50s paid slightly lower prices than the under 35s, they would pay more for outer clothing (rather than underwear) and accessories (mainly handbags), suggesting that these items are an investment and expected to have a lower ‘cost per wear’ over time.

Matalan’s Pinnington says price is important but that constant discounting is not in his strategy. “We don’t see ourselves as a high/low retailer. We follow honesty pricing and back it up with our Matalan Black top shopper programme that gives incentives but it’s promoted to and used across all ages.”

Overall, purchase of womenswear online has grown from 29 per cent in 2009 to 35 per cent in 2013 as more women over 50 go online. ComScore notes that the over 55s are the dominant internet user group in the UK with 9 million unique online visitors during 2012, 1 million more than the second biggest age group of 25- to 34-year olds.

Online shopping habits reflect the way the over 50s age group is segmented. Of the 9.5 million female shoppers aged 50 or over in the market, more than half are over 60, and more than half of the 35 per cent of online womenswear shoppers are over 60 (19 per cent versus 13 per cent from the 50- to 59-year old group). The research shows that the average 50+ woman spends £272 in six months with 17 per cent spent online.

Matalan recently deployed Tripps segmentation software, developed by Zinc Retail, to gain a deeper understanding of its customer segments, behaviour and fashion preferences. It allows the brand to make the most of this growth across all age ranges but in particular capitalise on the increased online activity noted by Kantar.

“With the rise of the internet, we’re trying to work with our buying teams to communicate and edit the ranges that are on the catwalks, then through personalised direct marketing activity and the data we have via the Matalan card, we can identify shoppers and communicate what is relevant to them. 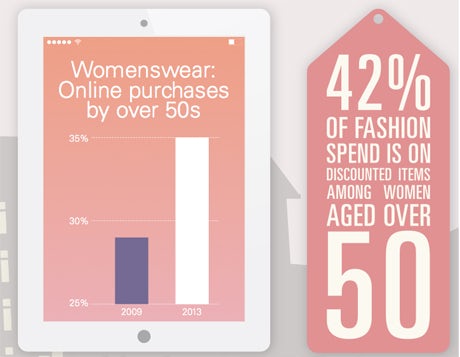 “Using Tripps segmentation allows us to edit the range to align what goes on our home page and digital marketing to individual customer needs,” Pinnington explains.

Targeting communications directly at the over 50s segment with its diverse lifestyles and need was variously referred to as ‘patronising’ and ‘limited’ by respondents. That the top 10 womenswear retailers’ growth was attributed to the over 50s segment is notable because the top 10 are also by and large generalists, staking no claim to one particular customer segment.

“With any retailer in the top 10, their shopper spend distribution isn’t a bell curve, it’s flat. There are retailers that are known for targeting older women but there is nothing to say that as a younger woman ages, she’ll start shopping there. If you’re a traditionally ‘older’ retailer, you need to be looking younger. No-one really wants to dress to look older. Everyone is looking behind them,” concludes Kantar’s Mitchell. 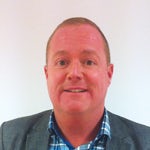 Just because you’re over 50, it doesn’t dictate the way you shop. It’s about understanding the over 50s and not taking them for granted. Ninety per cent of our customer data comes to us through the Matalan card so we can track behaviour over time and we  can understand end usage and it’s about fashion occasion, not age.

We segment in terms of going out wear or formal wear and look at shopping occasion. With our 12m shoppers on our database, we look at how they shop the store to deliver ranges that excite women regardless of age. Creating a range for the over 50s is stereotyping and how do you account for the trendy over 60s?

Through our data and accompanied shops we try to understand what individuals are looking for. Depending on the store profile we’ll cater the experience accordingly. One of our appeals is generations shopping together. Daughters will shop with mums and over the length of time of our database we can see cards that have been passed on through generations. We aim to deliver dynamically edited ranges whatever the customer’s age or fashion attitude. 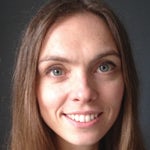 It’s one thing to include women from this age group in your brand approach, it’s another to pick them out in a marketing campaign. In the front row at London Fashion Week, regardless of whether the brand is definitely a favourite of an older age group, the bench will be full of far younger taste makers.

The companies that are successfully serving the older market are the ones that create knowing, sophisticated fashion for women of a certain mindset, not age. I may still be wearing certain brands in 10 or 20 years but I won’t suddenly revert to a model of a so-called 50-year old woman. Consumers should look to brands that do not define themselves by age, but that clearly are for that age.

Kantar Worldpanel gathers data by using a panel of 15,000 demographically representative individuals who scan every item that they have purchased. Kantar talks continually to these individuals in Great Britain (England, Scotland and Wales) about what they are buying, where they have bought it and why to develop a detailed picture of the British retail market.