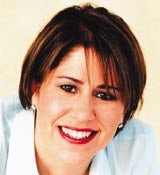 Hewlett-Packard’s (HP) top marketer, Allison Johnson, is leaving the company to be vice-president of worldwide marketing communications at rival Apple.

Johnson was vice-president of marketing at HP and a trusted adviser of recently departed chief executive Carly Fiorina. She will work with Apple chief executive Steve Jobs on the company’s advertising, marketing, communications and creative services.

HP says her departure is unrelated to Fiorina’s, adding that Johnson resigned on February 4 but was asked to stay on until after the company reports first-quarter earnings were revealed this week. Her last day is Friday.

Johnson joined HP in 1999 from IBM, where she worked on the company’s e-business strategy. Before that, she was an independent marketing communications contractor at Apple. At HP, Johnson was one of Fiorina’s fiercest defenders and was responsible for the “+HP = everything is possible” advertising campaign.

Fiorina resigned as chief executive last week after being ousted by the company’s board, which is said to be frustrated with the company’s sluggish performance and the disappointments of the 2002 merger with Compaq.

Kelvin MacKenzie, chairman and chief executive of TalkSport-owned The Wireless Group, plans to take the radio company private, five years after it floated. The &£100m deal is understood to be backed by private equity house Veronis Suhler Stevenson and the group’s existing investors.

Ebay, Microsoft and Visa have launched the Phish Report Network, a global service to combat online identity theft, which is known as ‘phishing’.