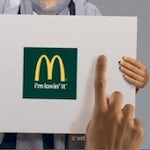 Targeting families in the home, it is trialling a new TV ad break concept in France, where brands such as McDonald’s, 20th Century Fox and Renault have launched ads linked together by an HP-branded creative.

The ad concept, created by BBDO and Goodby Silverstein & Partners, aims to highlight the HP printer’s touchscreen interface. In the ad break, a finger is shown swiping the screen to move to the next TV commercial.

If successful, the campaign could be rolled out in other markets including the UK as part of an integrated marketing push.

Jan Huckfeldt, HP marketing director of imaging and printing group for EMEA, says: “A lot of documents and photos remain on the hard drive and don’t ever get printed.

“HP is making it easier to crop, enlarge, edit and edit photos which you can do directly on the printer. It’s a big step forward in printing technology.”

Next year HP is also planning to launch a printer with internet capabilities. It will, for example, tie up with airline sites and Google Maps so that users can go straight to the printer to print out boarding passes or a map without having to use a computer.