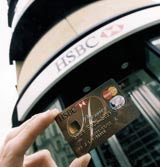 HSBC has merged its UK and group advertising departments and promoted its UK head of marketing communications, Craig Fabian, to head the team. As a result of the reshuffle, senior group advertising manager Delphine Giraud is leaving the bank at the end of April.

Fabian joined HSBC in August 2001 from Association of Investment Trust Companies (AITC), where he was campaign director. He was brought in by Ogilvie as head of marketing communications to address HSBC’s communications with its customers (MW August 23, 2001).

Before joining AITC, Fabian was the marketing director of Volvo Cars UK.

•Separately, HSBC announced a ten-year sponsorship of golf tournament, World Match Play Championship, last week. It has also increased the first prize from £250,000 to £1m, the largest in US and European golf tournaments. HSBC group chairman Sir John Bond says: “It gives our brand visibility in a positive way. We like the association with golf, and more importantly, our customers do.” Previous sponsors of the World Championship include Cisco Systems and Toyota.