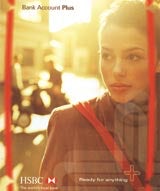 HSBC has signalled its intent to stir up the multi-billion pound current account market with the UK’s first free pocket-the- difference refund for customers buying by debit card.

But marketers are divided as to whether this “gimmick” will lure new customers. HSBC will give current account users a refund if they buy branded goods with its debit card and subsequently find them cheaper elsewhere. The price-promise insurance has been rolled out to 7.6 million existing customers. HSBC, and competitors including Citibank and Royal Bank of Scotland (RBS), already offer similar incentives on some credit-card purchases.

HSBC’s move is part of a strategy to increase its 15 per cent share of the current account market. Despite being the UK’s biggest bank, it trails behind market leader Lloyds TSB, which has a 21 per cent share, and Barclays, which has 17.5 per cent. These three banks, along with RBS, account for about two-thirds of the UK’s current accounts, which are lucrative because of the extra information held on customers, enabling a more effective cross-selling platform.

Rees says: “General insurance is cheap so it’s not going to cost HSBC, but the consumer can see value. Banks need to be competitive and they need to have a key point of difference that the consumer can buy in to.” However, he cautions: “You have to look at the whole package: if the rates are competitive then it’s a nice extra to have.”

The scheme does not cover internet or overseas sales, cars, computers, holidays, antiques and perishable goods. Customers can claim between &£10 and &£1,000 on each application, to a maximum of &£5,000 a year, but must show the receipt, account statement and proof of the cheaper price.

Former Abbey marketing director Angus Porter cites it as yet another example of big banks relying on gimmicks rather than working at giving consumers a better all-round deal. He says: “It’s like the HBOS cashback initiative: banks are overcomplicating things. Everybody knows that the current account market is inert, so while lots of people are dissatisfied they are not inclined to switch.” He believes the idea is “fine”, but adds that what people want from accounts is good customer service, no catches and low bank charges.

Predictably, HSBC’s rivals have also pooh-poohed its tactics. A Halifax spokesperson says: “This is an example of one of the big four banks coming up with a benefit that is not much use to most customers.”

Lloyds TSB, which offers phone insurance, travel insurance and vehicle breakdown cover as part of its packaged accounts, is also doubtful. Its spokeswoman says: “We would question the true value of the account,” adding that Lloyds TSB customers want “practical benefits”.

However, HSBC is convinced that its current accounts offer value and service even without the price promise. Head of personal banking marketing Andy Ripley says: “It is not a gimmick, it is a genuine offer. It is a very competitive market and we have differentiated ourselves.”