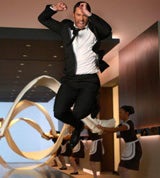 The ads are part of Lipton Ice Tea’s “Drink Positive” campaign and mark the beginning of a three-year partnership between Jackman and Lipton.

“Tokyo Dancing Hotel” sees Jackman’s character looking tired and alone until he is revived by a Lipton Ice Tea, after which he leads staff and guests in a dance through the hotel.

In “Hard Day’s Work” his character is seen filming a passionate scene with Reguera then pausing for an ice tea before returning to finish filming.

Jason Green, chief marketing officer of Lipton, says: “The new adverts highlight the key values of Lipton Ice Tea, which are positivity, optimism and the uplifting qualities of the drink.”