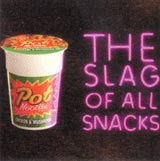 The Independent Television Commission has told KP Foods not to run its Hula Hoops Shoks “electric eel” ad before 7.30pm, after complaints.

Some parents complained that the ad, which depicts eels oozing out of a tap, frightened their children.

The ad, by Publicis, attracted 106 complaints. While some were concerned for the welfare of the eels apparently used, most were disturbed by the imagery – Hula Hoops’ marketers are shown tipping thousands of electric eels into the UK’s water supply.

Separately, Pot Noodle’s latest &£4.5m advertising campaign, which positions the brand as the “Slag of all snacks”, has attracted 63 complaints from TV viewers angered by the strapline. In the ads, created by HHCL &amp; Partners, the Unilever-owned instant snack is depicted as something shameful yet irresistible.

The ITC received 63 complaints, most citing the use of the word “slag”. Recent research for the Broadcasting Standards Commission found that 17 per cent of the general public thought “slag” was “very offensive” when used on TV, with 33 per cent finding it “fairly offensive”. The three most offensive words on TV were “cunt”, “motherfucker” and “fuck”. More than three-quarters of people found them “very offensive”.