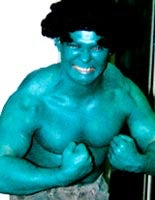 Wandering the corridors, they may have spotted copywriter Simon Riley dressed as the Incredible Hulk. They will have been reassured by the fact that not far behind him was another staff member armed with a camera, rather than a straitjacket.

As it happens, the staff have been making Super 8 films for a project organised by director Ed Sayers. A floor of the agency became a doctor’s waiting room with staff posed in dubious positions. One man had a vacuum cleaner hose attached to his private parts, while marketing director Julie Christian stuck to another member of staff after supposedly getting jammed in flagrante delicto.

Sounds like the rarefied Soho air is going to their heads!

Necessity may be the mother of invention, but she has not been pregnant with too many original ideas lately. Superficially, this is somewhat surprising. After all, economic conditions have been buoyant as never before, favouring a risk-taking entrepreneurial culture. And consumer society is close to obsessed with the quest for novelty – look at the […]

The Australian Tourist Commission (ATC) is reviewing its global advertising account, held by D’Arcy. The business is worth about &£2m in the UK and about &£5m globally. ATC’s latest campaign, created by D’Arcy, is running on TV. The review, which is statutory, will create a shortlist that is expected to include D’Arcy. The agency has […]