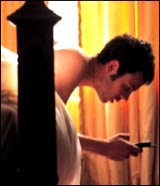 Orange: Hutchison was successful with Orange (top) even though Vodafone (left) and BTCellnet (above) dominated the marketHong Kong’s largest conglomerate, Hutchison Whampoa – the company behind one of the UK’s most successful brand launches Orange – now has ambitious plans to be a major force in European telecoms.

The company, which turned in a £10bn profit last year, stormed back into the UK market with the £4.4bn purchase of a third-generation (3G) mobile phone licence in May.

It is now searching for an advertising agency to promote its 3G network, with a budget estimated to be worth more than £30m (MW July 6). And it will be no run-of-the-mill account – involving as it does the creation and launch of the UK’s fifth mobile phone network brand. The history of Orange will not be lost on agency chiefs.

At least a dozen branding consultancies are competing to create the corporate ID – the UK operating company is trading as Hutchison 3G, but that will not necessarily be the brand name.

Hutchison has been out of the UK telecoms market for only seven months since selling Orange to Mannesmann for £20bn in November 1999. Mannesmann was then acquired by Vodafone AirTouch, which for regulatory reasons, sold Orange to France Telecom for £31bn last month.

But it now plans to link with Japan’s largest mobile phone company, NTT DoCoMo, and Dutch telecoms giant KPN to create a major force in the European market.

Hutchison is poised to sell a 35 per cent stake in its UK company to NTT DoCoMo and KPN for between £1.5bn and £2bn for 20 per cent and 15 per cent respectively.

The Hong Kong giant has vast resources from its businesses, which span telecoms, energy, retail, property and port operations. It backed Canadian consortium TIW to win the fifth UK 3G licence. TIW has a 9.9 per cent stake in the licence which could eventually fall to seven per cent.

But building a 3G network from scratch will cost billions of pounds – the five winning bidders having paid the UK Government a total of £22.5bn – and nothing will be launched until 2002 at the earliest. Hutchison also lacks a market presence – UK rivals have established customer bases and well-known brands through the existing mobile phone sector.

Vodafone AirTouch has 9.36 million subscribers, BTCellnet 8.07 million and One 2 One 6 million, while Orange is on 7.17 million, having added 1.2 million in the last quarter.

The Hutchison venture will have to start building and promoting a brand soon if its wants to make an impact, although many argue it has been there before, having entered the UK market with Orange when it was already dominated by Vodafone and BTCellnet.

But branding is not the only concern – the company also faces the problem of the rapid pace of technological change. In Japan, for instance, NTT DoCoMo’s i-mode wireless Internet service is considered well ahead of the rest of the world, but by the time it manages to build a network other companies will be offering similar mobile multimedia services.

By early next year, the UK operators which are offering WAP services will have updated their networks to offer general packet radio service (GPRS) technology. This will allow an “always on” Internet service.

One City analyst says: “Hutchison and DoCoMo have a chance, but they are a lot later in the cycle than the other guys [Vodafone, BTCellnet and so on] and have a huge investment ahead of them.”

He adds: “We need to see what their business model is – they could run a virtual service offering space to anyone else who wants to buy it, such as established UK brands like Tesco, or they could run it as a restricted network. They are not fully decided which way to do it yet.”

Robert Jones, consultant director at Wolff Olins, the agency behind the Orange brand, says any company establishing a pan-European brand with scope to become global has one important goal. “It has to create a brand which stands for something that is bigger than the technology – something people will buy into and not just buy. It’s a simple idea, but doing it will be much harder.

“It needs to look at models such as Ikea, which stands for more than just furniture, is “of the moment” and transnational. There is so much technology, that most of us can’t © see what it can do for us,” he adds.

The choice of the creative ad agency is going to present some problems for Hutchison 3G. Three of the big agencies – two of them part of global networks – already work with the UK’s mobile phone operators. Vodafone uses BMP DDB, BTCellnet uses Abbott Mead Vickers.BDDO and One 2 One uses Bartle Bogle Hegarty.

The fourth operator, Orange, launched a review of its £32m creative ad account in March after seven years with WCRS, part of the French advertising group Havas’ Campus network.

The destination of Orange’s UK advertising account has yet to be decided, with the company’s executives understood to be split on whether to hand it to Lowe Lintas or retain WCRS (MW June 22). No doubt the losing agency will be very interested in Hutchison 3G.

But the Orange account may not be confined to the UK, as France Telecom – which plans to drop its two mobile phone brands, Itineris and Ola, in favour of using Orange as a global mobile brand – could create a mammoth £100m global ad account. The Hutchison 3G account could hold similar opportunities.

Richard Hammond – managing partner of agency Spirit, which handles pan-European business from a London base – says Hutchison may consider setting up an alliance of agencies instead of appointing a big agency network.

“Clients such as Audi and Emirates Airlines have moved from one agency to agency alliances across Europe. It is possible with one team in the middle,” says Hammond.

But most agree that the winning agency faces a tough task, as one City analyst says: “It must do a decent job on the branding and getting the product right. It needs to be very innovative – it takes a long time to build a brand. The real question will be: can it get customers to switch from existing networks?”

The stakes are high – done badly, it could be one of the world’s most public brand launch flops. The challenge is to replicate the success of Orange on a global scale.

Packaged goods marketer Nick Canning faces huge pressure to improve the performance of The Sun and News of the World.

Mills & Boon, the last word in romantic fiction for the past 70 years, has undergone a complete redesign to bring the brand up to date and attract a new generation of readers.

BT and AT&T will have to swallow their competitive pride to make their joint venture work. Consolidation in the telecoms industry depends on it.