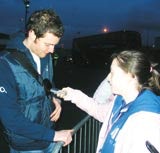 Perhaps the most significant of these is the Canadian deal, which will see Canadian advertising agency Urban Mobile Media developing versions of Hypertag software compatible with US and Canadian mobile phones.

Hypertag’s system uses short-range wireless devices – called Hypertags – to send information to mobile phones via infrared or Bluetooth. Consumers simply hold their phones up to the Hypertag to receive content such as vouchers, ringtones or games.

Because Hypertags use short-range wireless technology, rather than SMS, there is no charge to marketers or consumers for messages. Hypertags are small enough to be deployed in a wide variety of situations. They have been used in “interactive” posters and worn by field marketing staff.

Hypertags have also been used by O2 to distribute ringtones at football and rugby matches, while Warner Bros Records and HMV have used them to promote the latest New Order album and London Underground has distributed safety information through Hypertags.

In France, a reseller deal with Blackberry has already resulted in the campaign for EMI France promoting the latest Daft Punk album. A deal with Australian company Aura will see Hypertags used by UIP to promote the upcoming War of the Worlds film. In Spain, Hypertag has linked with Spanish company i/vista, which specialises in new media systems for advertising and information uses.

Hypertag co-founder Rachel Harker says: “The campaigns that are already in place in France and Australia prove that there is an international demand for our products and it’s just a matter of us generating the presence on the ground to fulfil it.”

The Publicis Groupe grabbed headlines after a long hiatus recently when it announced the launch of a creatively led boutique agency in Paris called Marcel.

Nike is threatening to pull out of its Â£303m deal with Manchester United unless the team improves its performance on the pitch.

Casio is radically overhauling its marketing in an attempt to shed its image as a fusty and old-fashioned manufacturer of calculators and cheap digital watches. Marketing director Mark Bernard admits people see the brand as boring and out of date, and hopes the &£1m-plus campaign will change this. The electronics giant, which produces more than […]