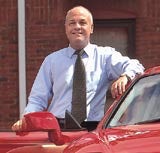 Hyundai Car UK (HCUK) has appointed Ray Pope as its new managing director. Pope, who has been promoted from his position of finance director at HCUK, replaces David Walker, who was recently appointed managing director of BSM, the world’s largest driving school (MW last week).

Walker left HCUK after 21 years following the company’s takeover by Hyundai Motor Europe, the Korean car manufacturer’s European division (MW June 16). He was one of three senior staff who did not move across to the new business.

The takeover followed the &£1.1bn acquisition of HCUK’s parent company, the RAC, by Aviva, which triggered the reversion of HCUK to Korean control.

Hyundai achieved its highest-ever sales in the UK last year with a 17 per cent increase, and Hyundai Motor Europe (HME) aims to further increase sales to support its ambition of breaking into the top five global car companies by 2010.

International Motors Group imported Hyundai cars into the UK from 1982 until 1994, when ownership of the UK franchise passed to Lex Service (now part of the RAC) with the formation of HCUK.

The advertising watchdog has not upheld complaints against the most controversial non-broadcast ad this year. The Advertising Standards Authority (ASA) received 650 complaints against a poster campaign for The L Word, a show about lesbian friends in Los Angeles. The posters feature photographs of women’s bodies from chest to thigh wearing only knickers and covered […]

SABMiller, owner of such premium beers as Pilsner Urquell, Peroni Nastro Azzurro, Miller Genuine Draft and Castle Lager, is ringing the changes. Its purchase last week of a controlling stake in South American brewer Bavaria for $7.8bn (&£4.5bn) has turned SABMiller into the second-largest brewer by volume in the world, behind InBev. It inherits a […]

Aegis Media UK has named Grant Millar and Matt Andrews as join managing directors of Vizeum UK. Millar joins the agency from BT, where he is head of communications and planning. Andrews has been head of strategy at the UK company for two years.