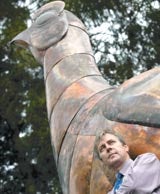 The Diary loves looking at big, heavy birds. No, this isn’t a story about Alison on Big Brother 3 – it’s about the new sculpture at The Famous Grouse’s visitor centre in Crief, Scotland.

What the Diary does question is the company’s claim that its visitor centre – which opens next week – will use “Disney-style technology, never before seen in the UK, to modernise the concept of a distillery tour”.

Exactly which generation of Disney-style technology the company will be using is unclear, but given the standard of other tours the Diary has been on, it is likely to involve plastic models moving jerkily while pretending to pour hops into a barrel.