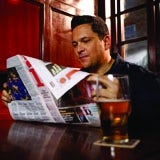 The Independent’s sister title i launches its first TV ad campaign this Sunday (16 January) after an eventful three months since the paper first appeared on newsagent shelves.

Feedback about the paper from rival journalists, media buyers and consumers has been “universally positive” so far, according to managing director for the i and The Independent Andrew Mullins, and although official sales figures not yet been released, initial indications suggest circulation numbers are also encouraging, he adds.

However, its launch has also been blighted by distribution issues, meaning many consumers were unable to find the product on shelves.

Mullins says: “We realised quickly, as the fourteenth newspaper entering into the market, dominated by two to three very big and powerful newspapers, across around 38,000 newsagents that you get lost very easily.

“Despite our distribution being national and as big as The Independent, visibility was poor and anecdotally a lot of people were telling us they could not find the paper.”

To combat the early distribution hiccups, this week a team of staff are visiting 22,000 newsagents across the country, conducting a remerchandising exercise and ensuring the product is repositioned to be visible.

The i launched without much marketing fanfare in October last year. Mullins said the company did not want to put significant money behind the brand until it was understood how the paper worked in the marketplace and consumer reactions could be gauged.

This was also the reason its ABC figures will not be published this Friday (14 January) alongside the rest of the UK’s newspaper publications’ results and are now delayed until February.

Mullins says: “It will take six months to find a stable sales profile for the product.”

The i now enters “phase two” of its launch activity and the paper is sponsoring the Heart Radio Breakfast Show throughout January and airs its new TV campaign, starring comedian Dom Joly (pictured) and campaigner Jemima Goldsmith (previously Khan).

The paper will also start charging advertisers for space from the beginning of February, as previously media buyers paying for advertising space in the Independent also received slots in the i as part of their deals.

Mullins says The Independent, which launched 25 years ago, was used as a yard stick to predict sales and consumer response, but the company has still been surprised by results and reaction so far.

“Nobody knows how a quality brand at 20p can, will or should perform. Some of the obvious things we thought might happen aren’t happening,” he adds.

Marketing strategy for 2011 is to be “agile and flexible” and although the company is not yet sure where its budget will be spent, more marketing activity will follow later in the year.

Mullins says: “Launching a brand new paper in such an established and mature sector is as difficult as it gets. Our money has to work four to five times harder and how you spend it is really key.

“That is why we have used it selectively and waited three months until after we had launched to do our ad campaign for example. It’s important to find out what works first before money is spent on it.”