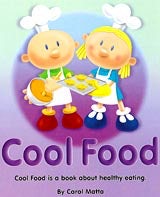 Iceland and the British Dietetic Association (BDA) have teamed up to launch a healthy-eating book called “Cool Food” to help schools teach children about healthy eating.

The book is being sent to almost 25,000 primary schools following research by Mintel International revealing that only 18 per cent of UK parents observe governmental guidelines suggesting children be given five portions of fresh fruit or vegetables a day.

The research was commissioned by Iceland as part of the ITV Year of Promise.

Iceland technical director Bill Wadsworth says a lack of understanding about the link between diet and long-term health is one of the major barriers to healthy eating.

Iceland says it has avoided branding the book in line with strict National Curriculum guidelines.

Supermarkets have recently come under fire from food groups claiming they are being irresponsible by targeting food products at children.

Rupert Howell, president of the Institute of Practitioners in Advertising (IPA), also warned advertisers about the risks of marketing to children in a speech at last week’s IPA New Year Reception.

Sainsbury’s and Tesco have launched food products aimed at children (MW January 18), claiming they do not include excessive amounts of fat, salt and sugar.

Iceland this week announced a fall in sales of 5.5 per cent for the four weeks ending December 28. The chain says that its organic-only approach was a mistake and should have been tested before being rolled out nationally.

Chief executive Bill Grimsey blames the lack of variety in the range and says the chain will return to selling non-organic ranges alongside organic ranges that do sell.