The new TV campaign, created by Karamara, will debut this evening with products featured including premium scallops and ostrich fillets, alongside more traditional Iceland staples such as frozen branded burgers and fish fingers.

In a departure from Iceland’s usual store-based campaigns, the ads will feature the Mysterious Girl singer cooking scallops and wild boar sausages at home.

“We want Iceland to have a broad appeal at both ends of the market and this new campaign is all about showcasing the range whether that’s basic freezer items or more luxury items that bring in a different kind of customer,” Canning told Marketing Week.

Kantar Retail insights director Bryan Roberts is convinced Iceland is talking up its quality as an attempt to draw in the M&S and Waitrose crowd.

“I think Iceland would have looked on in envy at how Aldi and Lidl broadened its appeal with their Christmas adverts and successfully lured in the M&S crowd,” said Roberts.

“Iceland is now where Aldi and Lidl were three or four years ago in that, in order to grow, it needs to broaden its appeal and show consumers it is more than just a value foods discounter. This new campaign looks to be its first steps into trying to convince consumers that its frozen products are worth spending more money on.”

On YouGov BrandIndex’s quality rankings, which average the number of good and poor consumer rankings for the quality of a brand, Iceland sits 20 out of 26 of the UK’s biggest food retailers.

Its unremarkable score on quality perception of -7.6 is significantly lower than rivals Aldi and Lidl, which, at ranks 5 and 7, have respective scores of 20.2 and 14.6; both ahead of Asda, Tesco and Ocado.

He hinted that Iceland might go on to explore a ‘rebirth’ through the ongoing six store trial of Food Warehouse, a new luxury frozen foods concept, and could re-brand some of its existing estate.

“The last two, three years have been so tough and our profits are down, so we are in deep s***,” said Walker in a speech at an award event organised by Business Supporting Communities (B2C) in January.

“We are at that point again when it is going to be re-birth. We have a new concept store that we have opened very recently and we now have six, the Food Warehouse, they are bigger than Iceland(stores) and there are much more luxury products, and they are going like a train. We have six, trouble is we have 850 of the other ones to sort out but I am sure we will.”

‘Andre resonates with the public’

However, Canning says that Food Warehouse will primarily provide Iceland with options to test in-store concepts and more premium seasonal lines, and that there’s ‘no current plans’ to revamp the core Iceland brand.

“The Xmas ads with Peter Andre were enormously popular and we had the highest recall and brand awareness of any food retailer, while spending one third of our direct competitors,” added Canning.

“Kerry was with us for four and a half years but we want Peter to be the face of Iceland for much longer as he really does resonate with the public.” 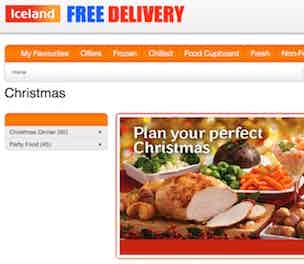 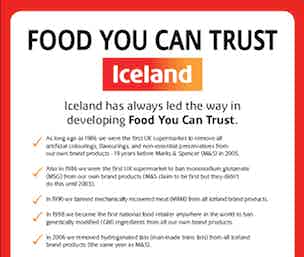