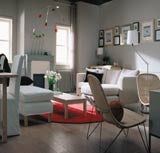 Home furnishings retailer Ikea is to launch a television, print and poster advertising campaign to support its furniture stores in the approach to Christmas. Called ‘Unlimited Possibilities’, the campaign features a couple in a room whose furnishing repeatedly changes in style. More than 3,000 individual Ikea products were used in order to provide an idea of the different options available at Ikea. The ad will feature the usual tagline, ‘Live UnLtd’. The campaign was created by Karmarama, which used director Antoine Bardot-Jacquet, the creator of Weiden &amp; Kennedy’s Honda cog ad. Media was planned and bought by MediaCom. Ikea is reported to be reviewing its £30m European media account following the appointment of Peter Hogsted, head of marketing for Ikea in Denmark, to the post of managing director in the UK.