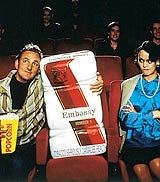 Imperial Tobacco has revamped its gift inserts card promotion in the face of the forthcoming ad ban, at a time when all other cigarette companies have abandoned similar schemes.

Imperial denies it is trying to side-step the proposed ban on cigarette promotions by replacing its focus gift inserts with quality assurance cards.

The cards will appear in packs of Embassy and Regal cigarettes, to be redeemed against a range of gifts.

With 75 of the new inserts, customers can claim a Focus Reward Card worth £5 at Argos stores.

Every other UK tobacco manufacturer has put its gift schemes on hold until the final round of the Government’s battle to ban tobacco ads in the House of Lords on May 22.

An Imperial spokesman denies the company is trying to get round the ban: “We don’t know what the outcome of the court action will be and, faced with a possible imminent tobacco ad ban, the only course of action open to us in order to continue our cigarette coupon reward scheme is to introduce quality assurance cards.”

An Action on Smoking &amp; Health (ASH) spokesman says: “If this is an attempt to get round a ban, Imperial will simply not get away with it. It may be able to try it on but it will get taken to the cleaners in court.”

A Department of Health spokesman says its solicitors are examining Imperial’s plans.