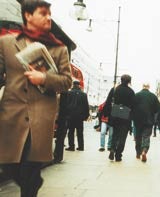 There’s a general belief among marketers that consumers are becoming wise to branding and marketing techniques, and that this is making communicating with them more difficult. Consistent with this, marketers pointed to higher service expectations, less trust of big companies, and more cynicism about marketing as key issues facing the industry, in a recent survey for the Marketing Society.

Data from Future Foundation nVision, a subsidiary of the Future Foundation Group, supports the idea that consumers are losing their faith in marketing, with the proportion of those disagreeing with the fact that most UK companies are fair to consumers doubling to 28 per cent over the past two decades.

But the data does not show any evidence that trust in the ability of favoured companies to deliver on their basic promise – the quality of their offer – has been shaken. This suggests that consumers have a poor perception of the role of companies in society rather than a negative attitude to the services they offer based on actual experience.

There are two interpretations of consumer cynicism. There is cynicism caused by over-familiarity or indifference to marketing. Younger consumers are less likely to feel this way because they are the least experienced consumers and rely most on brands and advertising.

On the other hand, there is cynicism that arises from an active resistance to the influence of marketing. A recent nVision Changing Lives survey revealed that gender, age and education are key factors in determining which consumers will actively resist the influence of advertising and big brands.

The survey found that resistance to marketing is higher among older age groups. Whether the cynicism is passive or active, the older generations outscore the young every time.

The data also shows that men are more likely to resist marketing. This is in line with more men reporting distrust of companies, lower enjoyment of and more cynical attitudes towards consumption.

This seems to indicate that the public is becoming less likely to perceive advertising as enjoyable and relevant and have faith in the superior quality of branded goods. However, the Future Foundation believes that the propensity to try out new brands has increased over the past 20 years, and the nVision survey offers no compelling evidence that there is growing attitudinal resistance to the principal tools of marketing.

The Future Foundation believes that greater cynicism about marketing can be partially explained by levels of education. Its research shows that those with degree-level or higher qualifications are significantly more likely to be marketing resistors than those with lower or no qualifications. It also shows that resistance is highest among social grades AB and E, and among the highest and lowest household income groups. This suggests that at the lower end of the income scale, economic constraints on the ability to “buy into” advertised brands is the key factor. At the top end it is powerful anti-marketing attitudes that are at play.

If there is no evidence of a significant resistance to marketing at present, the nVision data suggests this will change, because it is the better educated who tend to have more spending power, who set media agendas and frequently represent the “cutting edge” of attitudinal trends. As resistance to marketing grows in this group, it is likely to filter down and become a general consumer trend.

Resisting marketing messages is part of a trend that the Future Foundation calls the “new sophistication” – the ability to independently discern the real, the authentic and the rational amid the clamour and competitiveness of consumer society. It is a direct consequence of two generations of experience of mass marketing. Because these consumers have grown wise to marketing’s influence and are over-familiar with the profession’s techniques, traditional mass media campaigns almost inevitably fail to have an impact on these consumers.

However, the research suggests that this resistance is not part of a coherent set of anti-marketing beliefs. But it does show that consumers who resist marketing are less likely to believe that brands are the best guarantee of quality and that companies are fair, they are less likely to report enjoyment of shopping, and slightly more likely to be extreme ad avoiders.

But just because a consumer holds one of the above attitudes, doesn’t mean he or she will believe the rest. In fact the relationships between these attitudes are by no means strong and these are complex reasons why people make subtle and individual compromises. It doesn’t always follow that someone resisting the influence of marketing will also believe, for example, that companies are generally unfair and that a brand is not a good indicator of quality.

In fact, the strongest link to resisting marketing is psychological disposition, rather than other marketing-related attitudes. Resistors are half as likely as the marketing-friendly to prefer enjoyment to self-improvement, and are significantly more likely to prefer spending on durables than products that provide temporary enjoyment.

The biggest mistake marketers can make, then, is to play the part of victim and perceive resistance as part of a coherent anti-marketing agenda. Understanding the true motives behind this growing cynicism, its demographic profile and its many nuances, should provide the stimulus to creating new marketing strategies.