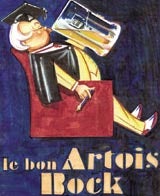 Inbev is launching a wide range of Artois-branded speciality beers in an attempt to move its flagship Stella Artois brand away from the “wife-beater” image.

The company is understood to be pumping millions of pounds into the move as it seeks to cash in on the vogue for speciality beers.

The company has confirmed that it is already looking to launch a beer called Sparta Artois, but no detailed plans have been unveiled. Industry insiders say the brewer is also looking into reviving other old Artois recipes, such as L’Autre Artois and Peeterman Artois.

A statement from Inbev says the company has been looking at opportunities to expand the Artois family of beers.

“We have been inspired by the archive material from Belgium, which led to Artois Bock, and we are now looking into the potential of a range of beers for different outlets and different occasions. It is too early to say what they will look like.

“The beers will be very different from anything that exists in our portfolio,” says the statement.