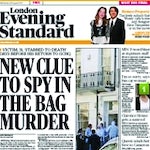 He will work across both titles, currently run separately, reporting to Andrew Mullins, MD of Evening Standard Limited and Independent Print, when he takes up his role on 1 September.

According to reports, Leonard will look at opportunities to build synergies across The Independent and London Evening Standard, with a focus on leveraging the latter’s local brand and presence across mobile and portable devices

Having worked on the commercial development of Times Online and on FT.com’s first paid content model, he will also look at opportunities for introducing subscription schemes.

In May, the London Evening Standard relaunched mobile apps on Apple, Android and BlackBerry devices, and announced Nokia S60 and Windows Mobile versions (nma.co.uk 24 May 2010).

Mullins is in the middle of a review of the two Lebedev-owned papers, with the findings, due next month, expected to lead to a restructuring.