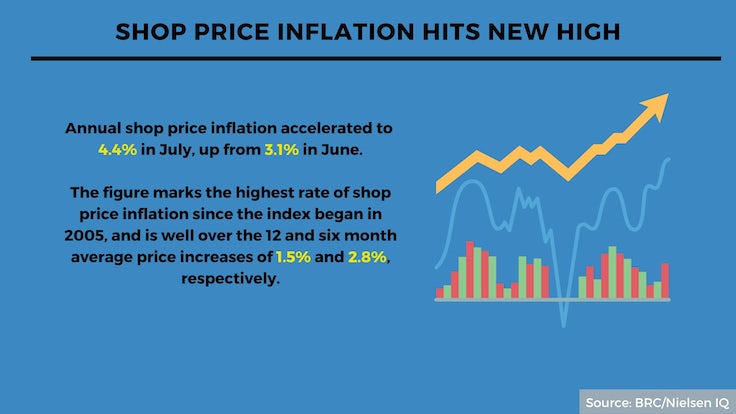 Annual shop price inflation has accelerated to 4.4% in July, up from 3.1% in June, according to the latest BRC-Nielsen IQ Shop Price Index.

The figure marks the highest rate of shop price inflation since the index began in 2005, and is well over the 12 and six month average price increases of 1.5% and 2.8%, respectively.

Food inflation rocketed from 5.6% to 7%, the highest rate since May 2009, as the war in Ukraine caused the cost and availability of animal feed, fertiliser and produce to rise sharply. According to the British Retail Consortium’s CEO Helen Dickinson, some of the bigger price rises were seen in dairy products, including lard, cooking fats and butter.

Non-food inflation rose from 1.9% to 3%, another record-high. Prices were hit by rising shipping prices, production costs and continued disruption in China, Dickinson says.

“As inflation reaches new heights, retailers are doing all they can to absorb as much of these rising costs as possible and to look for efficiencies in their businesses and supply chain,” she explains.

“Nevertheless, households and businesses must prepare for a difficult period as inflationary pressures hit home.”

NielsenIQ’s head of retailer and business insight, Mike Watkins, says the grocery industry “in particular” is under intense pressure as it tries to “shield” customers from inflation.

“At the same time there has been an increase in competitive intensity so customer retention over the summer holiday season will be key to help stem any further fall in volumes,” he adds. 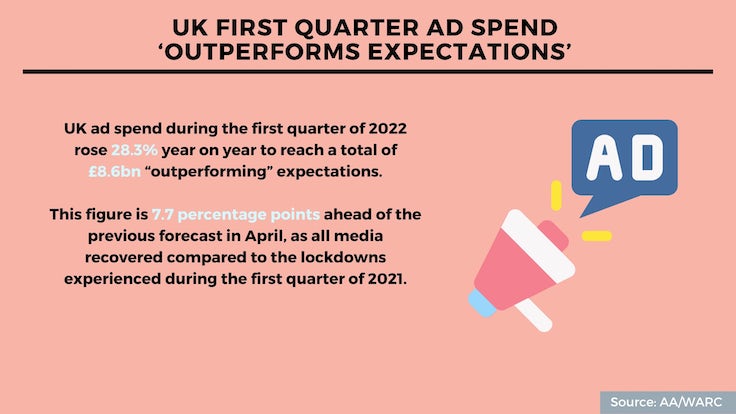 UK ad spend during the first quarter of 2022 rose 28.3% year on year to reach a total of £8.6bn “outperforming” expectations, according to the latest Advertising Association/WARC Expenditure Report.

This figure is 7.7 percentage points ahead of the previous forecast in April, as all media recovered compared to the lockdowns experienced during the first quarter of 2021.

As a result, the outlook for the total UK advertising market in 2022 has been upgraded (+0.2 percentage points) to 10.9% growth, with ad spend set to reach a new high of £35.4bn. These figures also reflect what the AA/WARC describes as the “consistent growth” of online advertising, which is forecast to account for 74.3% of all spend in 2022, compared to 73.5% last year.

Online formats – notably search, display (including social) and classified – grew the most in absolute terms, as the market share reached 74.9% for online channels combined. Triple and quadruple digit recoveries were seen in the outdoor and cinema sectors, respectively. The publishing and direct mail sectors also saw growth over the first quarter, resulting in improved outlooks for the year ahead.

However, despite the “encouraging growth” across most sectors, the impact of inflation means real growth in the UK’s ad market is expected to be just 1.8% in 2022. AA/WARC predicts the erosion of margins due to increased costs may affect marketing budgets, with inflationary pressures likely to continue into 2023.

Based on this latest data, the UK ad market is expected to grow by a further 4.4% in 2023, to a value of £37bn. This figure is, however, a one percentage point downgrade from the April forecast and equates to a 0.9% contraction in real terms. Due to the continued inflationary pressures, coupled with the level of geopolitical uncertainty, AA/WARC warn the UK advertising market is liable to see “further headwinds on the horizon.”

Millennials are the most price conscious generation 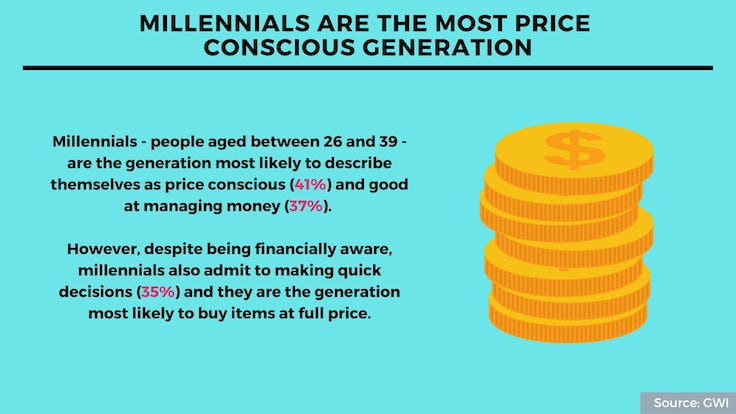 Millennials are also a health conscious generation, with more than two-thirds saying they exercise regularly and the number who eat fast food dropping steadily.

This generation is also starting to spend less time online across mobile and desktop, with the figure falling by 38 minutes since its peak in 2017. Time spent online has dropped by six minutes compared to 2021, with GWI suggesting this could be influenced by the fact millennials commitments and priorities are shifting. As of Q1 2022, 62% of 26- to 39-year-olds were parents, and the number of people working in management and senior roles has grown by 20% since 2020.

Jason Mander, chief research officer at GWI, says: “Although millennials span a varied age group – 13 years from people ages 26 to 39 – it’s a generation that’s come of age at a time of huge change and major global events. The ‘Great Recession’ of 2008, the Covid-19 pandemic, and most recently the cost of living crisis have all had a profound effect on their lifestyles, specifically their buying and saving behaviours.

Households have 12.1% less cash to spend on non-essentials 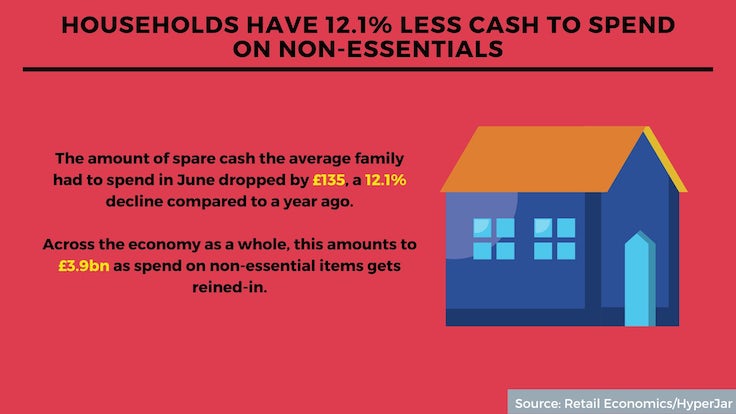 The amount of spare cash the average family had to spend in June dropped by £135, a 12.1% decline compared to a year ago, according to the latest data from the Retail Economics-HyperJar Cost of Living Tracker.

Across the economy as a whole, this amounts to £3.9bn as spend on non-essential items gets reined-in.

As a result, two-thirds (32.7%) of UK households say they are now putting strict limits on the amount they spend on food each week.

The poorest households have been the worst affected, with inflation across their spending in June hitting 12.1%, higher than the official rate of 9.4%, as people in this bracket spend a disproportionate amount of their income on food and fuel.

Richard Lim, CEO of Retail Economics, says: “The amount of spare cash available for families continues to vanish at an astonishing rate – especially for the most vulnerable in society. Many households have no choice but cut back across all areas of their discretionary spending as their financial positions are plunged into the red.

“For others, the bleaker economic outlook has encouraged a much more cautious approach to spending and they are trading down and delaying across many discretionary areas.” 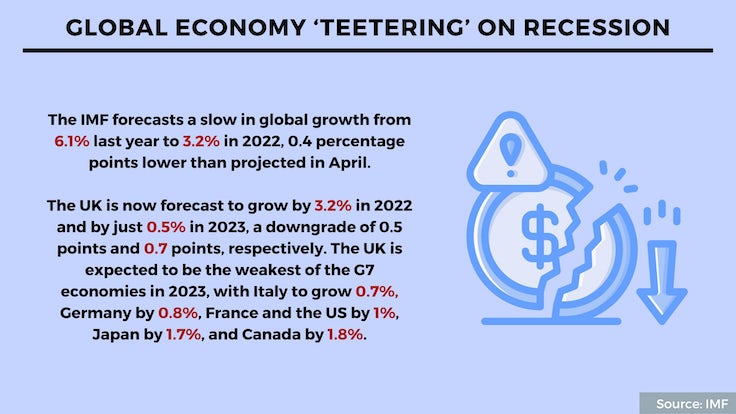 The International Monetary Fund (IMF) has downgraded growth projections for this year and next, warning the global outlook has “darkened significantly”.

A “tentative” recovery in 2021 has been followed by “increasingly gloomy” developments this year, including higher-than-expected inflation worldwide, rising interest rates, the impact of the war in Ukraine, and a slowdown in Chinese growth.

“The outlook has darkened significantly since April. The world may soon be teetering on the edge of a global recession, only two years after the last one,” chief economist Pierre-Olivier Gourinchas warned at the launch of the latest IMF World Economic Outlook report.

“In particular, a full shutdown of Russian gas flows to Europe or inflation pressures remaining more elevated than they’ve been in the past. And we’ve been repeatedly surprised by the persistence and the broadening of inflation in recent times, and also an increase in financial tightening around the world.”

Gourinchas said multilateral cooperation between countries will be “key” in areas ranging from the climate transition to food security and debt distress.

“Amid great challenge and strife, strengthening cooperation remains the best way to improve economic prospects for all and mitigate the risk of geo-economic fragmentation,” he added. 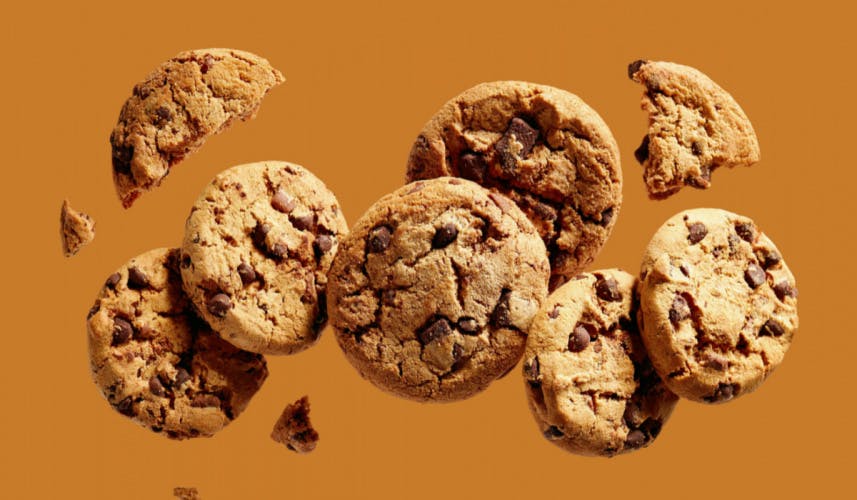