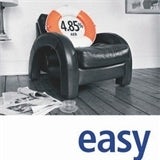 ING Direct, the online savings bank, is to launch a home insurance product following the introduction of its much heralded mortgage offering later this year.

The home insurance product will be only the third launch from the direct bank since it opened in the UK market in May 2003. However, earlier this year marketing director Gina Fusco revealed that the company was looking at a hit list of 15 product sectors based on demand from consumers, but he stressed the bank was in “no rush” to introduce them (MW April 6).

ING Direct markets itself on the simplicity of its one available product, a savings account that has attracted more than a million customers in three years, and says it hopes to translate its “no hassle” and “no strings” approach to both the mortgage and home insurance. ING Direct Savings offers just one rate of interest for all customers irrespective of their account balances.

A spokesman for the bank confirms a home insurance product will be introduced but says no further launches are planned at present. It is thought that roster agencies Vallance Carruthers Coleman Priest (VCCP) and direct shop Claydon Heeley will work on the launch of both products. ING Direct is reviewing its &£15m media planning and buying account, with incumbent Media Planning Group set to repitch for the business. The review is being handled through the AAR.

The UK arm is part of the International Netherlands Group, which operates in 60 countries, has more than 115,000 employees and is one of the world’s largest financial services organisations.