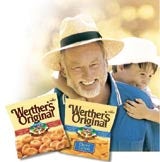 Confectionery company Storck, the manufacturer of Werther’s Original and Bendicks of Mayfair, has appointed Initiative Media to its &£15m pan-European media planning and buying business following a four-way pitch against incumbents Carat, MindShare and OMD.

Initiative will retain the UK and Hungary accounts through its BrandConnection network, as well as the Spanish and Portuguese business. It has also picked up the business in France from Carat; Belgium and the Netherlands from MindShare; and the Nordic countries from OMD.

Storck handed its &£4m Bendicks Chocolates account to McCann Erickson London last year after a three-way pitch (MW July 8, 2004). Storck has previously worked with Unity and Leagas Delaney on Bendicks in the UK. The remainder of the company’s advertising is handled in house in Germany.

Germany-based Storck sells a number of well-known UK chocolate and sweet brands, including Bendicks Mingles mints, Merci Chocolates and Campino, as well as a number of other brands sold outside of the UK.

The European Parliament is preparing to tone down proposed restrictions on health claims about food. Companies will be allowed to make medical claims if they are backed by scientific evidence. It is thought that the latest draft of the proposals will water down the original concept of “nutritional profiling” – the determination of whether or […]

Financial services communications are largely ignored by consumers, who find the marketing dull and uninteresting. But how can banks make their products more appealing?

The Post Office is to offer child trust funds from April.