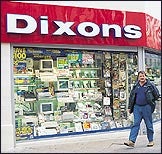 Dixons Group, the electrical retail chain that spends up to £96m on advertising in the UK alone, has appointed Initiative Media to handle media planning and buying for its European business.

The electrical retailer claims that Initiative’s appointment will not affect Walker Media’s responsibility for the UK business.

Dixons has been searching for a media agency to handle its European media buying for some time (MW November 2, 2000). Walker Media, which only operates in the UK, is unable to handle the business.

Initiative, which pitched against a number of undisclosed media networks, will be responsible for managing media for PC City in France and Spain, and for Dixons, Currys and PC World in the Republic of Ireland.

Dixons Group group advertising director John Laidlaw says: “Initiative was impressive in the pitch and will bring a lot of European experience to Dixons’ developing business in Europe.”

The Dixons Group has more than 1,250 stores across the UK, Ireland, the Nordic countries, France and Spain. In Spain, it has rebranded all its stores PC City, after acquiring the electrical retailer Ei System Computer in January 2000 for £15.8m. The group also acquired Scandinavian chain Elkjop for £444m in December 1999 and holds a stake in Greek electrical retailer Kotsovolos.