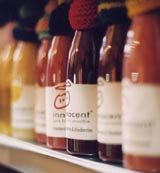 Innocent Drinks is trawling advertising agencies about a new campaign ahead of a &£6m multi-media marketing drive in 2006.

The premium smoothie brand is in discussion with Albion and Fallon, both of whom have worked with Innocent in the past, as well as Clemmow Hornby Inge. Wieden &amp; Kennedy and Bartle Bogle Hegarty.

The brief will also be put to the company’s internal creative team, which created its first television ad last April, when Innocent executives rejected the work offered by appointed agency HHCL/ Red Cell. The ad used the strapline: “Innocent smoothies. Your daily fruit.”

Innocent marketing director and former DDB account man Richard Reed says: “Next year will see a television campaign as well as advertising across print, digital and live events, all incorporated into a marketing spend of &£6m.”

Reed is at pains to add that Albion, which works with Innocent to promote the brand’s annual Fruitstock festival in London and attracted 100,000 visitors this year, will remain part of the company’s marketing plans whatever the outcome of the pitch.

The company, which produces natural drinks, including 13 kinds of smoothies, claims that its share of the UK smoothie sales market has been 62 per cent in 2005, a rise from 45 per cent in 2004.

PHD is believed to be in pole position to retain the Â£10m Transport for London (TfL) media planning and buying account. PHD has held the brief since 2001.

Walkers Snacks is launching a range of pretzels under the Sensations umbrella, in a further concerted effort to increase the “healthy” appeal of the snacks brand. The strategic shift is aimed at increasing the brand’s “better-for-you” portfolio. It is understood that the pretzels, due to be launched in time for Christmas, will be supported by […]

Investment in mobile marketing is expected to explode in the next five years as communication with customers via mobile phones evolves beyond simple text messages to sound and pictures Mobile telephony is growing ubiquitous, sophisticated and multi-functional. By the end of 2005, Jupiter Research estimates that 299 million people (76 per cent of the population) […]