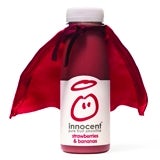 The £2.7m campaign includes a TV advert with the new strapline “here to save the peckish” and features a caped superhero smoothie bottle appearing to the backing track of Queen song Flash’s Theme – the soundtrack to the Flash Gordon film.

Marketing director Thomas Delabriere says: “Historically we have seen a huge peak in our penetration in January. People reappraise what they do in terms of eating and health after the excesses of Christmas and our sales always peak at this time.”

The TV ad will run from January and throughout the year and features several people at home, travelling and at work trying to avoid tempting unhealthy snacking. A caped Innocent smoothie bottle suspended on strings then flies in on each occasion to a dramatic backing track.

Delabriere says: “I’m confident this campaign will work. For the first time we are sending out a new message, rather than focusing on the health benefits and ingredients, we are giving people a clear occasion as to when and where to drink their smoothies.”

Accompanying the TV ad will be a poster and digital campaign, supported by a dedicated website, iPhone application, on-pack and in-store activity all rolling out throughout the month of January.

Innocent is working on the campaign in partnership with Rainey Kelly Campbell Roalfe/Swarm @ RKCR/Y&R which it appointed in October this year.

In April this year Coca-Cola increased its stake in Innocent Smoothies from 18% to 58% to become the majority shareholder as it looks to capitalise on the orange juice market.

Growth of 14% on the previous year saw Innocent become the biggest smoothie brand in the UK with 75% of the market share.