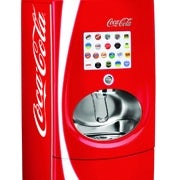 The Freestyle, a vending machine offering up to 125 different drinks, is expected to transform the business. Why? Because of its ability to gather vast amounts of customer data each day.

Coke was aware that the US consumer wanted a lot more variety from Coke’s dispensers than it was providing. What the company didn’t foresee was exactly how much variety was being demanded.

“We initially thought it might be 20 or 30 different drinks,” says Coca-Cola Freestyle general manager Gene Farrell. “The research came back and told us it was more like 100.”

This was a huge jump from traditional vending machines that only offered six types of drink – from the 500 brands that Coca-Cola owns. “The same research told us that the customer didn’t want a bartender to serve them from behind a counter in a restaurant,” says Farrell. “They wanted to play, to make their own drinks.”

Coke is now seeing consumers mixing products to invent their own drinks and then sharing information on the Cloud to get their ’creation’ out there.

“Customers can put together their own drinks combinations using the machine, so if they want to they can combine the eight flavours of Sprite available in the US, including bitter lemon citrus grapefruit, and lemon and lime, to make what has been named by its ’inventors’ as the ’Gummy Bear’.

“And we react to feedback. We saw customers writing on Facebook that there were only two flavours of Coke Zero, so we added the full array of flavours.”

In developing the self-serve drinks mixer that became the Freestyle, Coca-Cola called in some external expertise in the fields of software, technology and design from the likes of Microsoft, Apple, Ferrari and BMW. 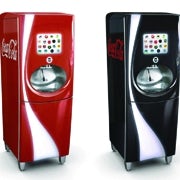 That industry collaboration seemed to ensure the Freestyle’s success, according to Farrell. “Consumers love it. We’ve been in the market since 2010 now and we’re seeing double-digit increases in sales. Our restaurant customers are telling us that their Freestyle machines account for increases in traffic.”

Still relatively new in the US, it is being seen as a revolution in distribution and dispensing within Coca-Cola.

Currently drinks dispensing machines in bars and restaurants account for about 30% of the business but this is expected to grow.

To the public, the Freestyle, which is now spreading in the US and should be in the UK by 2012, is nothing more than a clever dispensing machine. But for Coca-Cola this is a business reinvention story. “It required innovation in product, in packaging, in the supply chain, in route-to-market and in our consumer interaction,” says Farrell.

All the machines are connected via a wired network and each downloads consumption data by brand and day-part for every restaurant they are in.

“We can gather all that data and look at it by region, by customer type and by channel. We’re using that data in different ways. For example, we’ve developed a free iPhone app that allows the user to create their own drink by mixing the choices available. We’re putting a barcode reader into the machine so that it can talk directly to your mobile device,” says Farrell.

Coke plans to integrate this data with the American microsite MyCokeRewards. People will be able to make their own drinks via their mobiles and rack up MyCokeRewards credits when they buy a drink from the machine.

The innovation process at Coca-Cola requires that those pitching any idea build a watertight business case for the execution.

Says Farrell: “The concept of the Freestyle was already being kicked around when Coca-Cola hired me to help develop it. We didn’t have a platform to deliver our full portfolio to the consumer. The Freestyle, the mass customisation solution we’ve come up with, has been a six-year journey.”

New products can also be tested via the machines. “Historically we would test a product before launching a production run and hope that it caught on with consumers. Now we can look at what consumers are creating for themselves,” says Farrell.

“For example, a Raspberry Coke might turn out to be a very popular selection in a certain region and may mean we sell it in local stores. We can roll out ideas relatively cheaply across Freestyle and get an instantaneous verdict from the consumers. So we’re just scratching the surface for how this new information and marketing platform can be leveraged.”