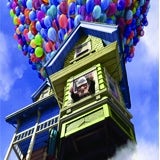 Studio Disney Pixar faced the challenge with Up of marketing a movie starring a grumpy 78-year-old to appeal to families with young children. Especially when stacked up against animated hits such as the Toy Story franchise and The Incredibles selling the Up seemed even more of a tough task.

But a combination of trade promotions, brand partnerships and TV airtime, among other activity, helped Up to take more than £34m at the UK box office and win the media category at this year’s Marketing Week Engage awards.

Lee Jury, executive marketing director at Walt Disney Studios Motion Pictures UK says that working in new ways with a TV channel to get exposure for a film was a key learning from Up.

Media agency Carat worked with TV channel Five to schedule Pixar film Monsters Inc around the opening weekend of Up. The partnership also included short pieces from one of the film’s characters talking about adventure – a central theme of the movie.

“What really stood out for me and where we certainly learnt for the future were things like the Five partnership. Getting Monsters Inc programmed on Five around our opening weekend almost created the platform on which to advertise,” says Jury.

It then used a similar idea when marketing this year’s Toy Story 3, this time working with ITV during the World Cup. Pixar created TV spots showing its characters doing penalty kicks and viewers were driven to a website to guess what happened next.

“Toy Story is different to Up because it is an established property, but one that had been dormant in terms of content for 10 years. Toy Story 2 was 10 years ago and the first one was 15 years ago.

“So we were appealing to an audience that was five or six years old in 1995 that is now 20 or 21, which is an audience that is quite difficult to connect with a family product. So the question was how we make it relevant and engaging for them,” says Jury.

Shifting activity towards digital media is also something which applied to Up and then to Toy Story 3. “A key thing we learnt was that on Up we had a partnership with MSN – and one of our key objectives is to shift some of our media emphasis into the digital space. The MSN campaign allowed us to target families,” says Jury.

Facebook was a key part of the marketing strategy for Toy Story 3, and the official page has 10.5m fans. Disney used the site to talk to people about the release of the film on DVD earlier this month [November].

Jury says:” The learnings were about using new media platforms in a more engaging and integrated way, both on TV and online – and having the content made for that platform”.

Learn more about the Engage Awards 2011 categories, including the Media category, here