Young people are increasingly using technology to find ways of saving and spending their money, and most teens are already thinking seriously about plans for the future to ensure they are financially secure, new research suggests. The data also indicates social media is a key way to reach this group, with the majority using a social network every day

The survey by media agency MediaCom covers a sample of more than 1,200 people in the UK aged eight to 19 – a demographic sometimes referred to as Generation Z – with questions on personal finance and social media directed specifically at teenagers. This portion of the study shows that 82% of younger teens aged 13 to 16 already have an online bank account. That figure rises to 88% across all teenagers, while 54% of people aged 17 to 19 say they use banking apps at least once a week.

In addition, 68% of all teenagers agree that saving money while they are young and preparing for the future is important to them, while 77% are concerned about earning a good income in the future.

The survey also shows that 38% of the 13 to 16 age group have used their own debit card to make online fashion purchases (rising to 55% across all teens) while nearly half (48%) of people aged 15 to 19 have either part-time or full-time jobs.

Pauline Robson, director of the Real World Insight division of MediaCom, believes today’s teenagers are more financially aware than previous generations because they have grown up during a recession. This presents an opportunity for financial services brands to reach out and engage with this age group, she argues.

“Kids are surprisingly influential when families are making decisions about finance,” says Robson. “This could be why we have seen an increasing amount of toys such as cuddly meerkats or robots being offered with financial products, as brands begin to tap into the pester power of children. Brands must create the right content but also the right engagement strategies.” 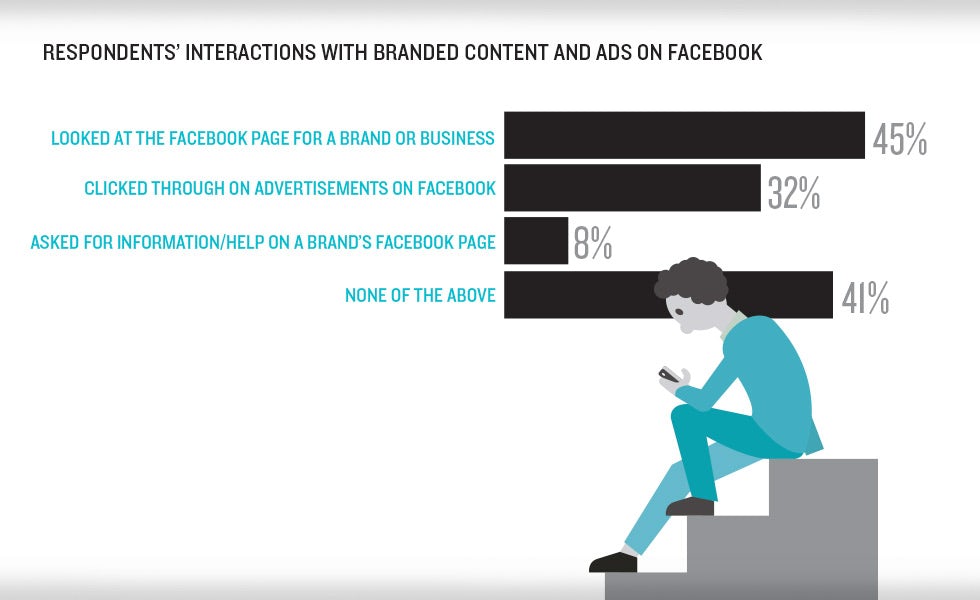 The research shows that social media remains fertile ground for brands seeking to target this age group. Nearly half of all teenagers (45%) say they have looked at the Facebook page of a brand or business at some point, while 32% have clicked through on adverts on Facebook.

Facebook remains the most popular social network among teenagers, with 54% stating they use it more than once a day in MediaCom’s research. This compares with only 27% who use Twitter several times a day.

A similar proportion of male teens (53%) state they regularly use Facebook compared to female teens (55%), but the network is noticeably more popular among older teenagers. For example, while 47% of those aged 13 to 16 say they visit Facebook more than once a day, the figure rises to 63% among the 17 to 19 group.

By contrast, Instagram’s popularity is significantly greater among female teens, but more evenly spread across the age splits. In total, 42% of teens say they visit Instagram more than once a day, but among females the proportion is 52% compared to 31% of male teenagers.

“Whereas in the past kids were much more focused towards Facebook, we are seeing that more and more are turning to image-based platforms such as Instagram, which is now starting to rival Facebook especially among older girls,” observes Robson.

“The way they use social media platforms is interesting. Kids are far more likely to use Twitter to retweet and recirculate other people’s ideas than tweet their own. We are really seeing them express themselves and forge identities via imagery.”

The research also confirms the huge popularity of online video among teenagers, as 72% confirm they subscribe to or follow at least one YouTube channel. This is evenly split across the sexes (70% of male teens compared to 73% of female teens), with music the most popular type of video selected by 57% of teenagers. This is followed by comedy (37%), gaming (33%) and health and beauty (22%). 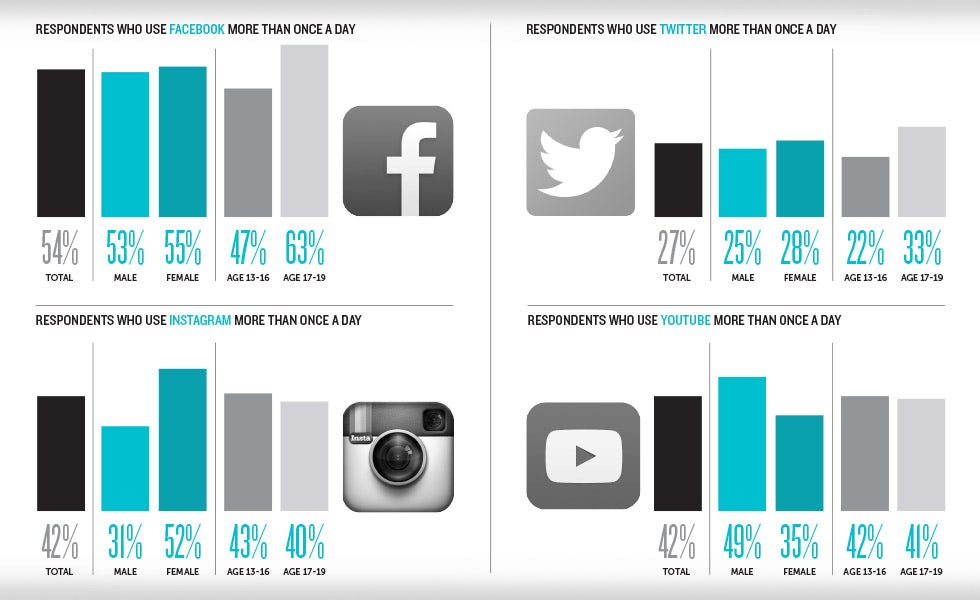 Robson believes it is no coincidence that a growing number of brands are working with popular video bloggers as they look to reach this audience. “Awareness of YouTube stars such as Zoella and Alfie Deyes has increased as young people see them as an accessible way to tap into the opinions of people within their peer group,” she says.

“The platform is away from the prying eyes of parents: kids can pick and choose where and what they want to watch on their own terms, not on a shared screen.” 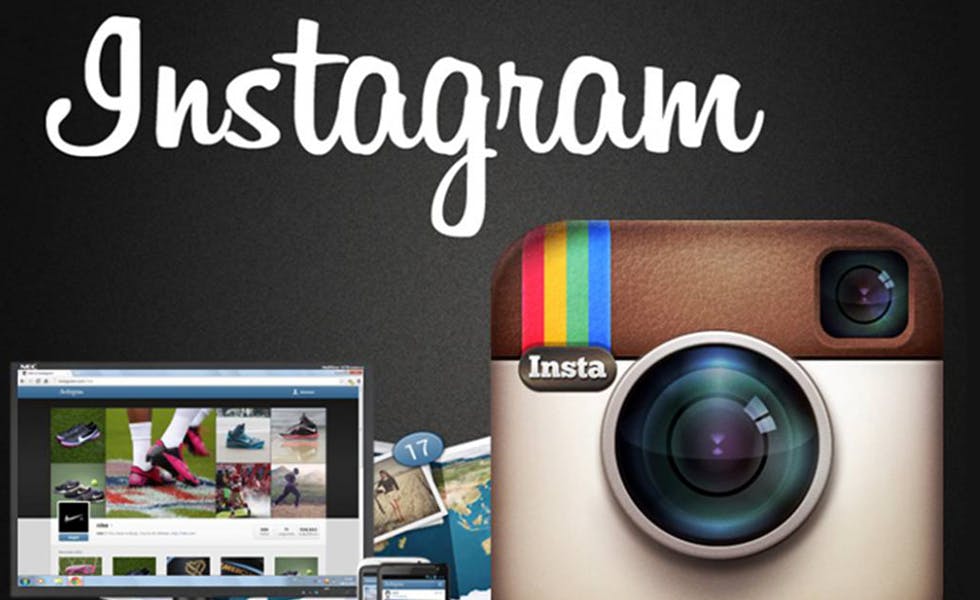 Instagram says it now has 200,000 active advertisers with James Quarles, the social media giant’s global head of business and brand development, welcoming its “diverse” advertiser base. 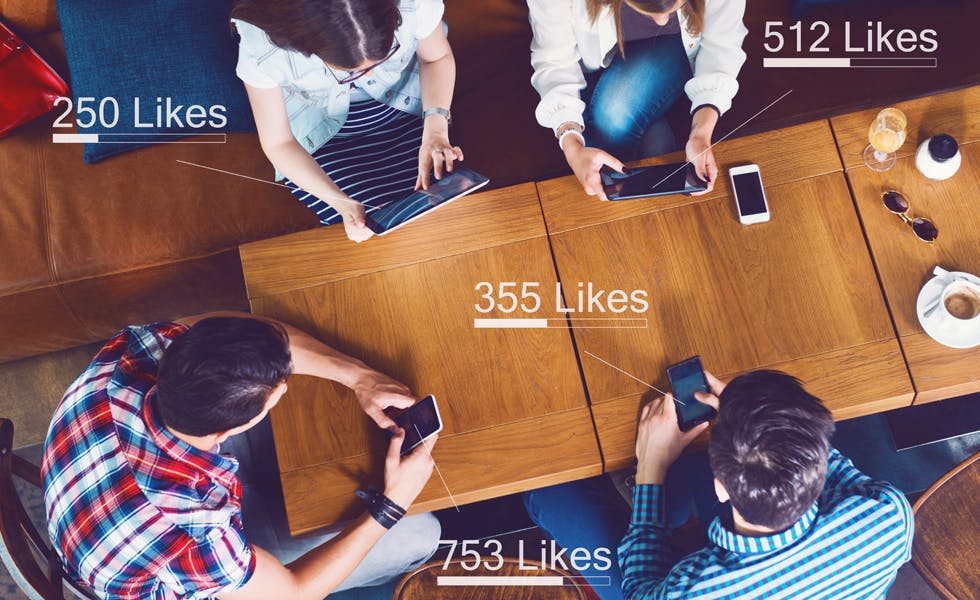