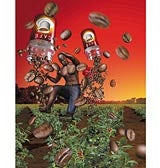 With frappaccinos and cappuccinos, self-heating coffee in a can or coffee-on-a-stick, plus a panoply of minor celebrities from Chris Eubank to David Ginola, UK coffee marketers have pulled out all the stops as they battle to beat declining consumption of the drink.

But this caffeine-induced marketing frenzy has had little effect on overall sales, which continue to fall. Even with ad spend reaching its highest level in the UK, and an unprecedented attempt to make the drink trendy among 18to 24-year-olds, the volume of coffee sold in the UK fell from 47,500 tonnes in 1996 to just over 44,000 tonnes in 2000 and is still dropping, according to Mintel. Additionally, retail sales of coffee in the UK dropped by six per cent between 1996 and 2001 from £815m to £796m in 2001 (Mintel).

Competition from soft drinks and the perception of coffee as being unhealthy have also contributed to this decline.

But according to Oxfam, coffee companies have managed to maintain huge profits, while the farmers who grow and pick the coffee beans receive a paltry income. Last week, a report by Oxfam, “Mugged – poverty in your coffee cup”, called on the big four coffee brand-owners, NestlÃ©, Kraft, Sara Lee and Procter &amp; Gamble – which buy nearly half the world’s coffee – to cough up some of their profits to help farmers who are producing the crop at below cost price.

Ads, promotions, the portrayal of coffee bar culture in television series such as Friends and Frasier, and more than a thousand coffee bar openings in the past decade, give the dual impression of coffee as sexual enabler (NescafÃ©’s slogan is “one thing leads to another”) and social lubricant. According to Mintel, brand-owners have largely succeeded in taking coffee upmarket, and this positioning appeals across the social classes.

The Oxfam campaign offers an opportunity to add a powerful set of values to this positioning – building on the fair trade agenda and positioning coffee as a solution to poverty, rather than a means of exploitation.

BP is an example of a company that has managed to place the values of social justice and environmental care, however superficially, at the centre of its branding. There is no apparent reason why brands in the coffee sector cannot follow suit.

Fair trade coffee is a rapidly growing – though still tiny – phenomenon, and is now on offer at coffee bar chains such as Costa Coffee. Also, from this week Pret A Manger is switching all of its filter coffee to fair trade. Last week, the Department of Trade and Industry announced that all the tea and coffee used for its in-house catering services will be of a fair-trade variety. In addition, the Co-op is introducing an own-label fair-trade coffee, offering consumers some reassurance that the producers are receiving a living wage for their products. Some doubt that the fair-trade varieties will ever take more than a marginal share of the coffee market, although, according to Mintel, they already account for about five per cent by value and retail sales are growing at 50 per cent a year.

Oxfam’s campaign walks a tricky tightrope however, as a crucial element of eradicating over-supply is keeping demand high. But if the image of coffee is sullied, demand will fall and this will exacerbate the problem.

Oxfam head of advocacy Phil Bloomer says: “The last thing Oxfam wants is a boycott of coffee. What it is saying is you can make a choice in the supermarket. However, fair trade is only important to a small number of farms. Oxfam wants a solution for the rest of the 25 million farmers.”

Oxfam’s campaign attempts to forge a link between coffee consumers and coffee producers on a much broader scale. It is switching the issue away from a niche body of politically aware fair trade consumers and targeting the mass market, which is dominated by the biggest brands. It holds the big four responsible for what it calls the “misery at the bottom of a coffee cup”, and recommends that consumers switch to fair-trade brands until the roasters have played their part in solving the crisis that has hit coffee producers around the world.

The charity claims that some 25 million people, who depend on coffee production for their livelihoods, are facing poverty because of falling prices caused by oversupply. The price of coffee beans has slumped by nearly half in the past three years, to a 30-year low. This means that farmers are selling it at up to 60 per cent of production costs, which Oxfam calls a “development disaster”.

The entry of Vietnam to the market in the Nineties and a rise in production by Brazil has led to production growth of two per cent a year. However, worldwide demand grows at only 1.5 per cent, driven by sales in “developing” markets. Oversupply now stands at eight per cent – with 117 million 60kg bags produced in 2001, but only 109 million being used.

Meanwhile, says Oxfam, profit margins on coffee brands in the West vastly outstrip many other grocery products. It says NestlÃ© has a 26 per cent profit margin on its instant coffee – double those of other consumer products, such as beer. NestlÃ© refuses to comment on this, though claims that its coffee margins have fallen over the past year. Last year, Sara Lee managed to maintain profit margins of nearly 17 per cent for its beverages unit, which deals mostly in coffee. “The companies’ booming business is being paid for by some of the poorest people in the world,” says the report.

Oxfam’s Coffee Rescue Plan calls on the big four, along with the governments of rich countries, to fund the destruction of at least 5 million bags of low-quality coffee worth $100m (£64.3m). The market has been flooded by low-quality beans as industrial farming methods have led to “strip picking” of coffee cherries, replacing the old method of plucking them by bunches. This means that many unripe and low-grade beans are now included, where before they would have been discarded. New steam technology enables lower-grade beans to be used for instant coffee, without affecting the taste of the final product.

The big four are particularly sensitive to accusations that they are using inferior grade beans. They all claim that high quality is the basis for the success of their brands. If the future of coffee lies in its premium positioning, then the big brands could benefit from this opportunity to rid themselves of inferior quality beans.

A good wage for a hard day’s work

Other elements of the rescue plan include introducing market regulation to ensure farmers are paid a “decent price” for beans, and the establishment of a fund to help farmers switch to alternative crops. These proposals are being discussed this week at a meeting of the International Coffee Organisation, which represents 50 producer countries, along with other players in the market, including the big four.

However, the prospect of companies adopting Oxfam’s demands or funding such moves using their profits seems remote.

A spokesman for Kraft says: “Kraft’s role is to try to increase sales.” Resolving the problems of poverty among farmers is “outside Kraft’s remit,” he adds. “We are a buyer just as in any other market.”

A statement by Sara Lee says: “Sara Lee shares Oxfam’s concerns about the situation on the world market for green coffee, although we do not fully support the argument and recommendations.” It sees paying minimum prices for coffee as “unsustainable” and that destruction of excess stocks is only a short-term solution.

But a Procter &amp; Gamble spokeswoman reveals the sensitivity of brand-owners to accusations of exploitation. She says: “No one can deny there’s a crisis and we need to help. We have provided relief and aid to those countries by, for instance, building schools and health centres and providing clothing.”

NestlÃ© – long reviled by campaigners, who claim that it exploitatively markets baby milk in the developing world, an allegation denied by the company – says it supports the principle of trying to regulate the market, as it suffers from the low price of coffee beans. It claims that as it is mainly a producer of instant coffee, most of its costs lie in the production process, rather than paying for the raw material. If coffee prices tumble, roast and ground coffee retail prices can fall more or less in line, while soluble coffee cannot cut its price as much, which places it at a competitive disadvantage.

NestlÃ© argues that keeping green bean prices high is in its economic interests. A NestlÃ© spokesman says: “Like Oxfam, NestlÃ© would support initiatives aimed at better managing supply, reducing volatility and maintaining coffee prices within price bands that provide a satisfactory livelihood for producers and allows consumption to grow.”

In truth, the workings of the coffee market are highly complex and difficult for consumers to grasp without a high degree of knowledge. The big four never tire of pointing this out, and seem confident that the issue will not blow up in their faces in the same way as other notable campaigns.

But campaigns against McDonald’s about exploitation of labour and the targeting of children, and others against Nike and Gap regarding the exploitation of labour in developing countries cannot be brushed off so easily. All three companies have faced challenging conditions since the campaigns began, as they battle against increased competition and changing trends. The role of the campaigns in sullying the images of these brands is difficult to judge. But brands are sensitive to media coverage, and with so much choice available, it is easy to avoid a brand with an unethical image.

It is the strength of the big coffee brands

that makes them vulnerable to criticisms over whether they are complicit with social injustice.

Instant coffee is a sector that has been more successful than almost any other in holding off the onslaught of retailer own labels, which account for just ten per cent of the UK instant coffee market, while NestlÃ© takes more than half, and Kraft about a quarter.

But the big four feel Oxfam is unfairly targeting them. They point out that they are at the end of a long chain of intermediaries in the market for coffee beans, which all take a cut. NestlÃ© says that campaigners’ claims that the company buys 12 per cent of the coffee crop and has a corresponding effect on coffee prices is “wrong”. A spokesman says: “NestlÃ© trades 12 per cent of the crop, but its impact on prices is only 1.7 per cent, because it buys 12 per cent of something that is traded six or seven times.”

There is an opportunity here for the interests of the brands and the campaigners to coincide. If the big four support Oxfam’s campaign they will be able to add a fresh positioning to their coffee brands – just as BP has adopted mild green credentials in its brand positioning. While innovation and marketing has been unable to stop the decline of coffee in the UK and other Western markets, a radical agenda linking consumers and producers could yield results for the mass-market brands as it has done for the fair-trade brands.