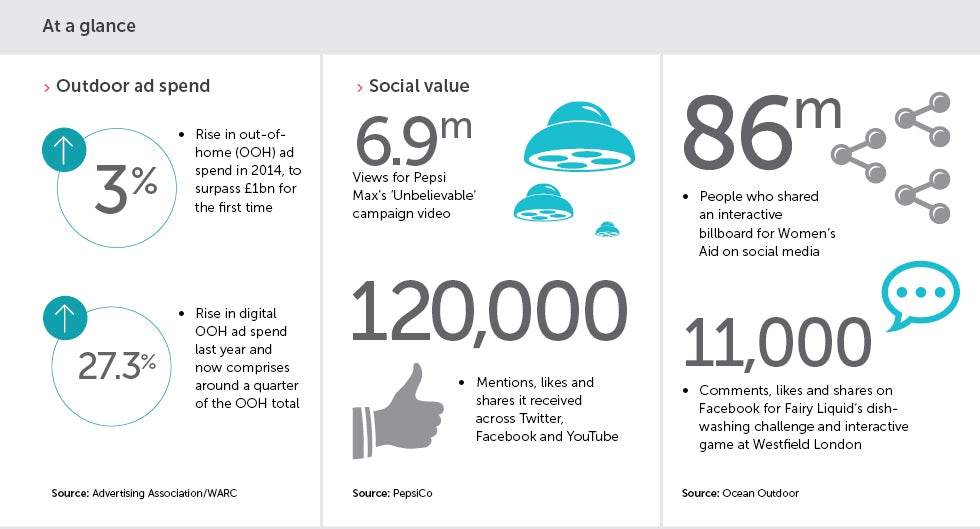 Birds Eye’s money-filled melting ice block, Carlsberg’s beer dispensing poster and Pepsi Max’s alien invasion at a bus shelter are the latest examples of out-of-home campaigns that passers-by can physically interact with, where going viral is key to the investment.

Brands that are looking to cater for experience-hungry consumers are venturing to outdoor channels to provide interactive campaigns that can be easily shared. The reasons behind these campaigns may differ but what they have in common is need to spread the word about the activity to get the most out of the advertising spend.

“Innovative outdoor campaigns create a talking point because they’re disruptive – they stop people in their tracks and encourage them to take notice in a way that the average advert cannot always guarantee,” says Steve Chantry, UK marketing director at Birds Eye.

Last month the brand unveiled a 20-foot frozen billboard on London’s South Bank to launch iFreeze, iSave – an initiative to encourage consumers to reduce food waste and save money by making better use of their freezers.

Inside the ice block was £700, which Birds Eye says is the value of food that the average family throws away each year. Passers-by were able to collect the money as the billboard melted.

“These pieces of activity create social currency and consumers are happy to share their experience.”

“The fact that people can get involved or interact means that you have far more time to get your message across,” adds Chantry. “Plus, if it’s something they enjoy you have the added bonus that they may well take pictures or post about it on social media, meaning the billboard has a far greater reach and potential than simply those people there on the day.”

To get the most from the billboard, the brand images of the ice block were shared with the media, a time-lapse video was created and turned around within 24 hours and assets were housed on an ‘iFreeze hub’ and shared on social networks. TV advertising and an in-store campaign also went live the same week.

However, brands don’t always have to rely on coverage on the day or week of the campaign to gain awareness, as content can be used for campaigns long after the original outdoor media activity ends. For example Pepsi Max’s ‘Unbelievable’ campaign, which took over bus shelters to play pranks unsuspecting consumers, built in a plan for shareable content (see case study, bottom).

Campaigns have to be not just eye-catching but also on-brand. Carlsberg recently created a poster on Brick Lane in east London complete with a beer-dispensing tap, from which people could serve themselves half a pint of lager. In line with the brand’s enduring strapline, the copy read ‘Probably the best poster in the world’.

Although the activity, created with agency Fold7, lasted for one day only, the poster had people queuing from midday into the evening. Carlsberg’s subsequent content strategy included a national and trade PR campaign, social amplification within its owned channels, and paid-for media to support all of the content.

The brand says capturing the activity on film was vital to tapping into current conversations, as well as creating buzz long after the activity. The poster reached 60 million consumers globally from earned PR with over 30 million impressions on social media.

“Consumers value experiences,” says Dharmesh Rana, senior brand manager at Carlsberg UK. “By creating an experience that is out of the ordinary, such as a beer-dispensing billboard, consumers are naturally more engaged than they would be with a standard communication. These pieces of activity create social currency and consumers are happy to share their experience.”

Rana adds: “The investment required in a straightforward outdoor campaign to achieve the same level of reach would have been cost-prohibitive. By creating an experience that consumers were willing to share we maximised our reach and created a piece of viral activity that travelled globally.”

Interactivity and viral content in outdoor are the latest developments for a channel that continually reinvents itself.

Stacey Knight, director of futures and content at JCDecaux says: “Interactivity is about putting the consumer at the heart of the campaign. It’s also about memorability; as soon as you interact with the brand you’re three times more likely to remember that brand than you are if you just see it on screen or a poster.”

For domestic violence charity Women’s Aid, putting passers-by at the centre of its campaign was vital to its core message. The charity does not have any advertising budget but won a competition to feature on Ocean Outdoor’s network of out-of-home sites with a campaign created by agency WRCS.

Interactive billboards showing a woman with a bruised face with the words ‘look at me’ were erected to coincide with International Women’s Day in March. Using facial recognition technology each time a person paid active attention to the poster the bruises disappeared. In addition a live video feed ran along the bottom of the screen showing those looking at the screen and registered the views.

The issue the charity was trying to address was that domestic violence isn’t only disempowering for the victims but for everybody. “The basic tactic of the ad was to turn a passive observer into a more empowered observer – someone who would believe in their own ability to do something to end the problem,” says Polly Neate, chief executive officer of Women’s Aid.

“It was the interactivity that made the campaign,” adds Neate. “It was an intrinsic part of the message. Without it, if it was just an image of a woman covered in bruises,that wouldn’t be an empowering image at all and wouldn’t be something that we would want to use.”

Further to this exposure, Ocean Outdoor also worked with Channel 4 to create a ‘making of’ video that was shown in an ad slot during prime time, ensuring the campaign gained value beyond the initial activity.

The emergence of interactive outdoor has witnessed the merging of experiential marketing with traditional posters, creating the all-important ‘impact’ by which this medium tends to be measured.

Further examples of brands jumping onto the trend include Skoda UK, which invited commuters at London’s Waterloo station to personalise their own Skoda Fabia, then to see themselves in the car using augmented reality on JCDecaux’s large-scale digital screen on the concourse.

Another example is P&G’s Fairy Liquid, which combined an experiential campaign with Ocean’s outdoor screens. Last year the brand broke the Guinness World Record for the largest cake sculpture to raise funds for its long-term charity partner Make-A-Wish at Westfield London.

Alongside the campaign was an interactive game and out-of-home campaign created by Grey London. Players outside Westfield London could compete against each other to locate golden coins hidden amongst a series of dirty plates that they needed to wipe clean using iPads connected to the full motion digital screen.

Ocean Outdoor head of creative solutions Catherine Morgan says: “Naturally people follow what other people do so we always find with something physical like a game, if you see people doing it you are much more likely to take part. Having brand ambassadors there to encourage people take part maximised that game.”

The total amount raised for Make-A-Wish was recorded on the digital screen at the main entrance to Westfield London, which also broadcast individual messages of congratulations to the winning players and asked shoppers to text a number to donate £3.

To tie the activity back to Fairy’s brand, shoppers were then told to enter the shopping centre towards the giant cake, which fed 12,000 people whose dirty plates were then washed using a single bottle of the washing up liquid, P&G claims. It says the campaign reached millions across social media with over 11,000 comments, likes and shares on Facebook, and 187 pieces of coverage in the media.

“The integration of outdoor with experiential enabled Fairy to leverage engaging, fun technology,” says Scott Popham, senior communications manager at P&G. “We always start with the consumer first and build experiences that speak to the hearts of our consumers. By creating an event that showcased Fairy’s brand character while helping raise money for a great charity, consumers were offered a unique experience.”

Ocean Outdoor’s Morgan says that outdoor media shouldn’t just “push innovation for the sake of it, it has to be right and true for that brand and something relevant”. However, beyond the campaign message, gaining a reputation for relevant innovation can improve brand perceptions.

“Depending on who the brand is, [there is an] affiliation with technology and being forward-thinking,” she says. “It’s valuable to be positioning yourself as someone doing something different, ahead of the game.”

To raise awareness of Pepsi Max with its key demographic of 18- to 24-year-olds, the soft drink brand decided to ‘prank’ consumers at bus shelters. The ‘Unbelievable’ campaign, which looked to promote the zero-sugar element of the drink, was created from insight that the brand’s audience looks for unique experiences and stories to share with friends.

It created a bus shelter where a live video feed on a high-definition screen gave the illusion of a clear window onto the street. The brand then mapped 3D animations over the screen in order to trick unsuspecting commuters with events such as alien invasions and a giant robot attacking a city. A sensor adjusted the animations to match varying light conditions.

In order to create sharable content, the brand captured people’s reactions and then shared the videos on a dedicated YouTube channel. The video of the bus shelter was viewed more than 6.9 million times, over 87% of which were earned views.

The video scored a Facebook engagement rate of 9%, representing the percentage of those people who saw the content that went on to interact with it. This is six times the category’s average engagement rate of 1.5%. The video also gained over 120,000 mentions, likes and shares across Twitter, Facebook and YouTube. 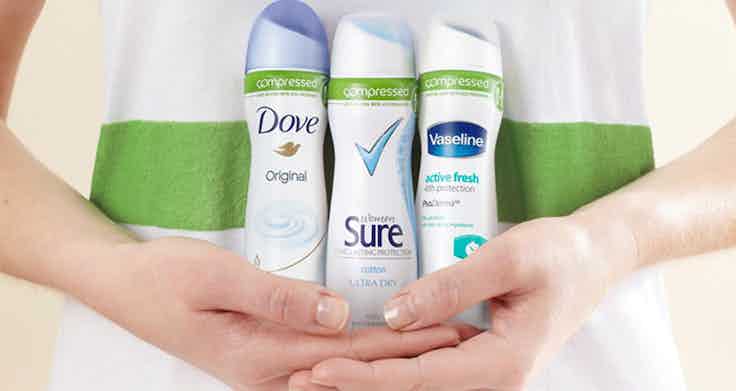 Unilever’s “sustainable living brands”, such as Dove and Ben & Jerry’s, accounted for half of the company’s growth last year and grew twice as fast as other brands in its portfolio, according to the company. 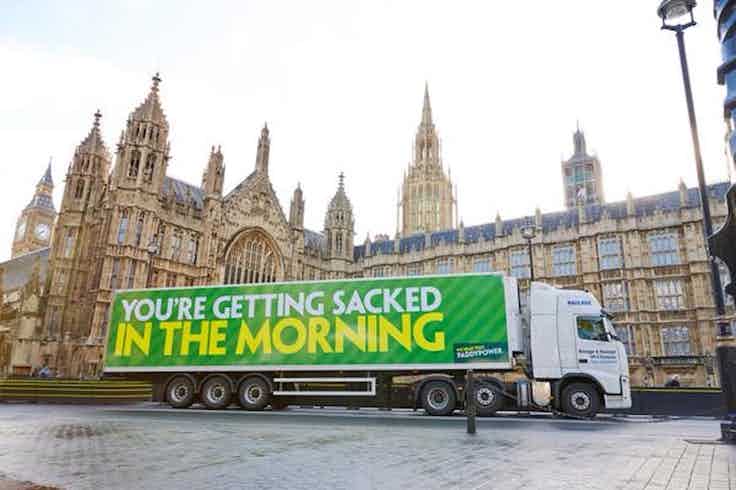 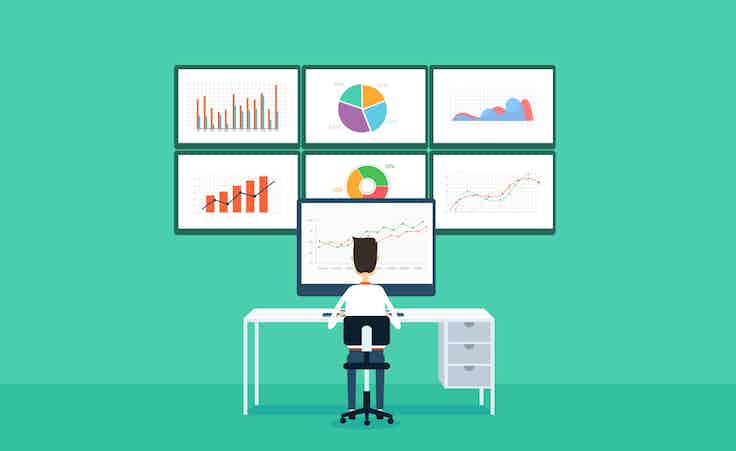 Without robust integration between technology and customer experience, the encounters that consumers have with brands offline and online can be inconsistent.