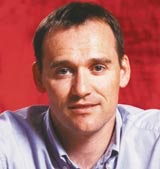 Interbrew has promoted UK marketing director Richard Evans to the global role of vice-president for commercial strategy. He will be responsible for managing the brewing company’s international brands portfolio.

Interbrew is in the middle of a review of its advertising business, which is worth £96m globally and £14m in the UK. The reviews are being carried out separately and a decision on both appointments is expected soon.

Interbrew category and brands director Phil Rumbol has been promoted to replace Evans. Rumbol had been overseeing Evans’ responsibilities while the marketing chief was on secondment to a “secret” role to spearhead a new strategic project for the brewer (MW June 5).

In his new role, Evans will report to chief planning and performance officer Jo van Biesbroeck and will work closely with chief commercial officer Brent Willis. Willis was promoted to the post this summer (MW July 3) from his position as global marketing chief of the Belgian brewer.

Interbrew UK has also realigned its board and promoted UK and Ireland regional president Stewart Gilliland to zone president for Canada. He has been replaced by Interbrew US president Steve Cahillane. Interbrew brands include Boddingtons, Murphy’s, Hoegaarden and Stella Artois.