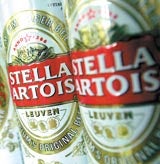 Interbrew UK is to launch “half-pint” Stella Artois cans in an attempt to reignite the stagnant lager category. Called Demi Beer, the new 284ml cans are expected to be available this summer.

The launch will also attempt to appeal to “occasion drinkers” – who do not drink as a matter of course – as the “reassuringly expensive” beer tries to consolidate its leading position in the market.

One industry insider says: “The 284ml can is half of the old imperial pint. Also a small-sized can is easy to market to a consumer café culture, interested in occasion drinking rather than binge drinking.” At the moment, Stella Artois is only available in 440ml cans.

The beer category has been hit by massive price decreases in recent times. Two of the biggest brands which tried to hold the line on price have been Stella Artois and rival Beck’s, both of which suffered serious sales volume declines as a consequence.

Last year, Interbrew teamed up with electrical retailer Philips Electronics to launch a draught beer dispenser aimed at the home market (MW August 26, 2004). Called PerfectDraft, the appliance has a tap handle, an internal cooling system and a pump. It claims to keep beer at a constant temperature of 3º Celsius and dispense it as it would be served in a bar. It is available alongside six-litre metal kegs of Stella Artois.