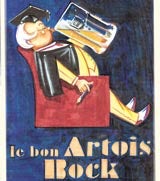 Interbrew UK is resurrecting its 113-year old beer Artois Bock, which it stopped brewing in the late Fifties, this summer.

The new 6.2 per cent ABV speciality beer will be aimed at the premium market and will be supported by a £2m advertising and marketing campaign.

The launch follows the global launch of its Brazilian beer Brahma. Bock, however, will initially only be available in the UK and Belgium.

Artois Bock was the predecessor to Stella Artois and the drinks giant is hoping that the new beer will benefit from the halo effect of the £40m investment behind the main Stella brand.

Interbrew UK marketing director Phil Rumbol says: “We discovered the beer recipe while cataloguing the brewing archives in Leuven, Belgium. Artois Bock has everything that a premium drinker looks for — superior quality, taste to savour and a story to tell through its brewing past.”

Artois Bock will be rolled out in selected on-trade and take-home outlets from late August, and will be available both on draught, in half-pints only, and in 275ml bottles. It will retail for between £2 and £2.50 per half pint.

The press and internet advertising campaign for the launch will be handled by Lowe, which has already started working on the brief. The agency already handles global advertising for the main Stella brand.

Rumbol adds that Artois Bock was one of the first Artois beers served at Leuven University, and was so popular with the academic staff that the beer became known locally as “the Prof”.

Explaining the rationale for re-introducing the beer, Rumbol says: “The speciality beers sector has really taken off over the past two years, bringing new consumers into the beer category.

“The familiarity with and trust of the Artois name among consumers will enable Artois Bock to bridge the gap between premium lager and speciality beer, widening their drinks repertoire.”