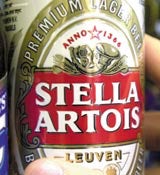 Interbrew UK, the manufacturer of Stella Artois, has slammed the Government’s proposals to set up an independent fund to finance community projects designed to tackle alcohol-related harm.

The Government proposal, outlined in the National Alcohol Harm Reduction Strategy by the Home Office last month, calls for the industry to finance the fund which would look at providing alternative activities for young people and information about alcohol misuse.

Speaking at the All Party Parliamentary Beer Group this week to present the industry’s first response to the Government’s strategy report, Interbrew UK regional president Steve Cahillane questioned the validity of the fund. He said there were already some effective industry-funded programmes through the Portman Group. The Portman Group is a trade body funded by the alcohol industry, set up in 1989 to promote responsible drinking.

Cahillane says: “If an alternative fund were established and administered by the Department of Health, Home Office and a separate board, then we may actually see less industry expertise in understanding consumer behaviour.”

He urged the Government to use “industry expertise” to understand consumer behaviour when tackling alcohol misuse issues and pointed towards individual company initiatives, which he claims have a direct impact on alcohol-related harm.