Marketing and sales specialists have seen their pay rise by 12% from £527 in December 2008 to £592 in June this year, according to the latest snapshot survey carried out by recruitment agency Russam GMS.

The research shows that those interims willing to work overseas also saw pay increase by 10% from £707 to £778.

Age is determining how much interims can command with those in their 40 and 50s earning the most from assignments.

These findings are in contrast with the last survey, which recorded the first slowdown recorded by the recruitment agency, which began its survey in 2000.

Figures to December 2008 indicated that interim marketers took a pay cut of 6% from £561 to £527. The rate of decline in assignments is also slowing. Volume of work is down 4% to the end of June compared with the last survey, where volumes decreased by 11% to the end of December 2008.

The latest Ipsos MORI market audit second quarter findings commissioned by the Interim Management Association (IMA) also indicates signs of recovery, with IMA members seeing an 11% increase in assignments from 493 to 548 in the months between 1 April to 30 June.

Despite the uncertainty of the economic climate, most interims are committed to their career choice, with 30% saying they would never think about returning to permanent positions. Half of respondents say they would only consider returning to full-time employment if the opportunity was too good to turn down. 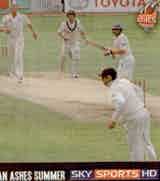 A BSkyB campaign trumpeting high definition sports coverage of the Ashes and British Lions tour has been rapped by the Advertising Standards Authority (ASA) because it is misleading.

Pizza Hut and online film streaming service BlinkBox.com have teamed up to offer a “perfect, relaxing night in,” with discounted movies with every Pizza Hut Delivery order.