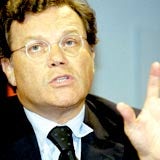 The new integrated agency, headed by industry guru and MCA chairman Kevin Thomson, will be relaunched under a new name in September (MW last week).

The major advertising groups, all have internal communications consultancies, but WPP seems to be stealing a march on its rivals by combining two well-respected consultancies to give them global coverage.

He says that people are the key to differentiating companies: “From an investment point of view, employee satisfaction and customer satisfaction are very closely linked.”

A recent survey conducted by MORI on behalf of MCA states that, in the past three months, one in six consumers have been put off from making a purchase by the way they were treated by staff.

Interbrand director of internal brand management Andy Milligan backs this up, saying 66 per cent of customer defections can be attributed to inappropriate staff attitudes.

If staff are the key to successful consumer relationships, why has it taken business leaders so long to take on board what people like Thomson have been saying for the past ten years?

Tim Hughes, business development manager of online travel agency Expedia, says: “It is no good building a brand if your employees don’t buy into it.”

Expedia deals with internal communications itself, taking staff to places such as Ibiza as a way of combining fun trips with learning about the travel business.

Internal communications really comes into its own when companies are merging, rebranding or, as with Royal &amp; SunAlliance, launching a new product and brand.

The £20m launch of More Than, the company’s new car, home and pet insurance service, hit the headlines with its illegal fly-posters (MW June 21). But according to marketing director Mike Tildesley, the £1m spent on internal marketing had a much more significant effect. It elicited comments such as: “I have been with the company for 12 years and this is the most exciting day of my life.”

Tildesley says: “If you fail to get people [staff] on board, your above-the-line budget is completely wasted. Internal communication is just as critical as external.”

But Tildesley says that companies have to be careful not to overload staff with information.

He says: “There has to be a mix of push (meetings and training) and pull (intranet and in-house magazines/newsletters). You have to treat staff like consumers.”

But with some marketing departments struggling even to secure their external marketing budgets it can be difficult to convince business leaders to put money aside for internal communications.

Gala Leisure sales and marketing director Richard Sowerby believes internal communications should be at the top of a company’s priorities.

“I don’t think marketing has anything to do with it – marketing tends to go in trends. Internal communication should sit at the very top of any company,” he says.

Danny Moss, director at the Manchester Metropolitan University Centre for Corporate &amp; Public Affairs, says: “When companies are looking for the least painful way to cut costs, communications – particularly internal – are the first to go.”

“That would really make a statement about how it values its people. The objective of internal communications is to support the business, add to the bottom line.”

When NTL acquired Cable &amp; Wireless’ UK cable and consumer telephone business in May last year, the job of informing all 22,000 staff involved was enormous. But after an integrated campaign through MCA, Windsor-Lewis says staff awareness of the acquisition stood at 85 per cent, with 82 per cent saying they rated the information given highly.

But many companies are sceptical and seem to believe internal communications are “an act of faith” when it comes to results.

Bringing in an internal communication consultancy is the current trend, but Rob Quick, director of client services at the Marketing Store Worldwide, believes this will be a short-term solution.

He claims companies will eventually create internal campaigns in-house. As a result, agencies such as MCA, Banner McBride and Smythe Dorward Lambert will have to broaden their remits.

At the end of the day, staff are the key to companies’ reputations, and as such need to be involved in the building and direction of a brand. After all, they are the ones who meet consumers face to face. If they don’t know what the brand stands for, who does?