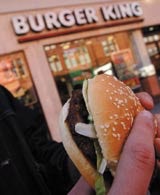 Burger King International top marketer Andrew Brent has left the fast-food chain after just a under a year in the job. It is not known whether the chief marketing officer has a job to go to.

It is understood that he left the company at the end of last week and that his departure is not expected to affect UK marketing director Paul Greyish. Burger King has not appointed a replacement for Brent and it is not clear whether it intends to.

Meanwhile, the chain is introducing a new range of bake-and-serve baguettes to its UK menu. There are four variants, which will go on sale from April 1 and will be supported by a television and radio campaign. The launch is part of the chain’s increased focus on offering healthier options.

Last year, Burger King introduced the Tender Crisp Sandwich, which contains more than 800 calories and 47g of fat, despite the increased focus on healthier eating (MW October 14, 2004). The product was credited with increasing sales in the US.