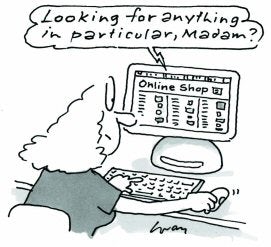 This column has on occasion been accused of entertaining reactionary views, of wistfully harking back to a golden age, possibly some time in the 1950s, when policemen clipped small boys around the ear and housewives knocked up delicious meals from scraps of meat and assorted items of garden refuse. This is a calumny. Progress is our watchword. These very lines were forged in the white heat of the technological revolution and there is no bolder surfer than I on the waves of cyberspace.

Nor do I lament the casualties that fall under the onrushing wheels of change. Indeed, some are to be welcomed, not least the demise of the high street shop. According to the market analyst Verdict, town centre retailers have suffered their first drop in sales for two decades owing to the boom in internet shopping. Last year, they took 767m less than in the previous year and, predicts Verdict, still tougher times lie ahead. Good.

Shops are hellish places and deserve to be swept away, their time is passed. Consider their awfulness, beginning with their staff, of whom there are either too many or too few. There are too many in the shops where you simply want to browse unmolested. Step across the threshold and they appear, like ants at a picnic. They invade your personal space as though they owned it and force their attentions on you. They used to ask: “Can I help you?” Now they say: “You awight there?”, which is just as bad. There are too few assistants in the kind of shops that leave you unmolested. Where are they when you want to pay? My local B&Q, for example, is always the same. It takes about five minutes to find what you want to buy and about 25 minutes standing in a queue to pay for it. Marks & Spencer is the same. Unless you have time to kill – perhaps you are waiting for a train that leaves in an hour’s time – there is no point in going to the trouble of choosing something because there will be no one at the checkout to take the money. As for supermarkets, they find different ways to irritate. They combine the long queues at the checkout with an inspired silliness when your turn finally comes. “Hello” says the assistant, without looking up. She says this because she has been told to, not because she wants to greet you. Then, in the same flat voice, she adds, “Do you need help with that?”, meaning do I need assistance to put a bottle of Beck’s and a bar of chocolate into a plastic bag.

Retailers do not like to employ staff, that much is plain. Containing costs is paramount and the fewer people that are employed, the better. Retailing is not a service industry in the primary sense of providing a service.

Then there is the noise. Retail management cannot bear silence. They must have music and they think customers must have it too, good and loud. Anyone who has spent 20 minutes scouring the aisles in search of an elusive bottle of horseradish sauce to the strains of Lulu singing “Shout” has had a taste of what lies in wait for mortal sinners.

Contrast the contrived hell of the high street with the emollient calm of internet shopping. You can browse for as long as it takes, in silence and without interruption. True, you cannot touch and feel and smell the goods, but the lack of human contact is sublime. Nothing quite beats the impersonal touch. And it’s cheaper to shop online. No need to travel, the goods come to you. And if you don’t like them when they arrive you can always send them back. I, who have always detested shopping, now find it a pleasure.

All the same, I have to admit that the worm of reactionary regret chews at the entrails. High street shops have been a part of our lives for centuries and their demise causes a tinge of regret. Perhaps for old times’ sake we should preserve their memory in visitor theme parks based on Disneyland’s Main Street USA, an idealised romantic recreation of jolly butchers, flour-dusted bakers, beaming candyfloss merchants, and old-fashioned grocers.

Then again, we cannot stem the tide of progress and nor should we weep at the downfall of ogres.

Come, friendly bombs, and fall on Boots, None of us could give two hoots. And while you’re at it flatten Smith’s, And Tesco, and Asda and Sainsbury. It will only take a couple of jiffs, And we could all be home in time for tea.