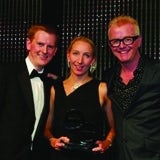 – Don’t be afraid to enter because you never know what might happen.

– Be credible in your entry

– Don’t overinflate yourself. Just give the story with the facts behind it.

Howells, then a kids brand manager at Innocent, won the EMR Rising Star Award 2010 for her promotional work on Innocent Smoothies for Kids. She beat a fine selection of entries from some of the marketing world’s youngest and brightest talents and was handed the award on the night by host Chris Evans to a thundering round of applause.

Howells says that she and her colleagues were playing a sweepstake game about awards winners on the night at Grosvenor House “that might have involved an element of drinking” and she was totally surprised when she was called to the stage.

She says that she entered originally because Innocent was encouraging teams to enter awards for campaigns and while researching she saw the Rising Star category.

Howells now works at Mars Petcare as a senior brand manager on Pedigree and says of her win: “It was a massive confidence boost for me and has given me a degree of credibility.”

She enjoys her current job because she loves dogs and “it’s a complicated consumer group – unlike with kids you can’t talk to dogs”. It also suits her lifestyle as she recently acquired a puppy and now lives in the countryside.

Her inspirational marketers are entrepreneurs and, unsurprisingly, include Richard Reed and the other founders of Innocent. She says that they had a “big impact on her” in showing ways of doing business with a key lesson “to keep things simple and have fun whilst doing it.”

Howells also admires Richard Branson for his fearlessness in taking risks and for now “starting to use his position to drive awareness of issues he feels passionate about”.

Looking to the challenges that lie ahead for marketers, she says in the short term they have to deal with rising costs in every area, with pressure from retailers, and a broader set of logistics. “We have to make our budgets work harder and invest in the right areas.”

But the bigger challenge is how to deliver creative work and excellent communication with consistency all the time.

Howells adds that being a Rising Star has opened up doors for her, such as appearing at Marketing Week’s inaugural conference The Annual, and she says to her eventual successor: “Take the opportunities that the award brings your way.”

For herself, Howells wants to get some international experience under her belt eventually but still intends to work on great brands.