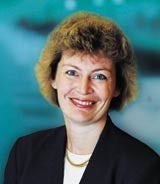 It is a curious fact that Sainsbury’s Supermarkets deputy managing director Sara Weller and its new group chief executive Justin King began their careers at Mars as part of the same graduate intake. But just as the two were to be reunited earlier this week with King’s arrival at the struggling chain, news broke that Weller, who was responsible for marketing, is quitting to move to Argos as managing director.

It is no coincidence, say insiders. Since King’s appointment was announced last November, Sainsbury’s management team has been bracing itself for change and Weller’s departure, although of her own volition, will be the first of many.

It is expected that King, who has made it clear the management team needs a change in culture and should get more in touch with customers, will demote managing director Stuart Mitchell.

In fact some people are surprised Weller did not make the break from Sainsbury’s sooner. Those close to her believe she was frustrated at being passed over for the managing director’s role in January last year in favour of Mitchell – the two had worked together as assistant managing directors before the then chief executive and now chairman Sir Peter Davis made his selection. Weller was later linked to the Boots chief executive post, which went to another former Mars colleague, Richard Baker. Both Weller and Mitchell are thought to have been disappointed about losing out to King as chief executive.

One insider claims it was always unlikely that Weller would have stayed once King arrived, even going so far as to suggest that if she had, it certainly would not have been “a marriage made in heaven” as she may have felt that he was no “better than her”.

At Mars, King started on the trading side and is described as a “live wire” and “energetic”, while Weller, who is said to be “calm” and “unflappable”, began her career taking a variety of roles before becoming UK marketing manager and finally rising to become Mars Europe consumer development director.

Weller left the confectionery giant for a UK-based job at Abbey National. There she rose to retail marketing director and overhauled the marketing by creating campaigns based on the theme of simplified banking.

Chris Pinnington, chairman of Euro RSCG London, the agency that created the “Because life’s complicated enough” advertising for Abbey, says: “She doesn’t suffer fools gladly. She taps her pencil on the table and narrows her eyes when she thinks someone is trying to bullshit her.”

Weller is not known as one of the industry’s flamboyant characters, with an understated life-style and dowdy dress sense, but she has a reputation for being straight-forward and is regarded as a talented marketer.

PHD managing director Morag Blazey, who has worked with her on Sainsbury’s advertising, says Weller is quick to get to the crux of an issue: “She is really bright. When she looks at things she sees straight to the nub of the problem.”

Devoted to her family – a husband, who is a professor of chemistry, and two children – Weller has managed to maintain a strict work-life balance and is home in time to put the children to bed. But she has a reputation for being a little frosty, though loyal once you have gained her respect.

Neil Jones, commercial director at Carat, which worked on Abbey’s account during her tenure, says: “When you first meet her, she comes across as a real ice maiden. But once she comes to value your opinion and respects what you say, she opens up and you see a different Sara – one who is often amusing.”

Ambitious to get to a plc board-level role, Weller moved on from Abbey when it was made clear a financial business background was needed in order to progress. She took on the challenge of turning Sainsbury’s around, joining as marketing director in 2000 following the disastrous “Value to shout about” campaign that had knocked the supermarket’s image, as well as staff morale.

A former Tesco shopper (owing to the proximity of the store to her home in Basingstoke), Weller set about rejuvenating Sainsbury’s image, buying into Abbott Mead Vickers.BBDO’s Jamie Oliver campaign and signing the chain up to the Nectar loyalty scheme.

For a time the chain appeared to be in recovery, but it has again fallen prey to City sniping, following dissatisfaction with Davis’s leadership and poor results culminating in last Friday’s warning that underlying profits for the year to March 27 are expected to be lower than last year’s &£695m.

One person close to the business says: “If there’s anything right at Sainsbury’s, it is the marketing. All the bits that are wrong – the estate, the pricing and so forth, are elsewhere.”

Those close to Weller claim she had become frustrated with the bad press and internal politics, saying she is keen to run her own company. Weller takes up the reins at Argos in June, replacing another high-flying female marketer, Kate Swann, who has moved to WH Smith as chief executive. The two are said to share characteristics: both are cool and forthright.

Like Sainsbury’s, Argos is a mature business, but unlike the supermarket it is in rude health, outperforming other retailers. Argos’s interim results for the six months to September 30 showed a 27 per cent increase in operating profit, to almost &£74m, on sales up 14 per cent to &£1.4bn.

The challenge for Weller will be to maintain this growth, but it won’t be easy as the opportunities to grow by opening new stores are diminishing and increasing competition is emerging as supermarkets move into non-food lines, says Verdict Research chairman Richard Hyman.

Making Argos more acceptable to a wider consumer base is one route. Argos could also try to encourage shoppers to increase the size of their average shop. Meanwhile, Euro RSCG London, Weller’s old agency, handles Argos and it has been busy trying to change brand perceptions.

Hyman adds: “Argos is facing increasing competition of a kind that it has not really been exposed to before. When its new managing director is a marketing-led and demand-driven person, it’s a very encouraging move.”

But some say Weller wasn’t first choice for the Argos role and others note that she has been shielded from the rough and tumble of trading at Sainsbury’s.

Abbey customer propositions director Angus Porter, who worked with Weller at Mars, says: “She won’t be afraid to tackle costs, as well as make other difficult decisions. She can, when necessary, be a tough nut. She is also a very good developer of people and creator of teams.”

That is certainly one task Weller must address at Argos.