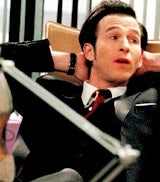 Slay is described as “the master of the Machiavellian approach to office politics and super-model shagging” who winds-up and alienates his colleagues over the seven-show series with insidious scheming. Rather like Fawlty Towers set in a marketing department, mishaps and incompetent colleagues beset Slay.

The Diary thinks the concept is just too close to the truth for comfort. Judging by these antics, the Beeb should surely have filed this under “fly-on-the-wall documentary” rather than “comedy”.