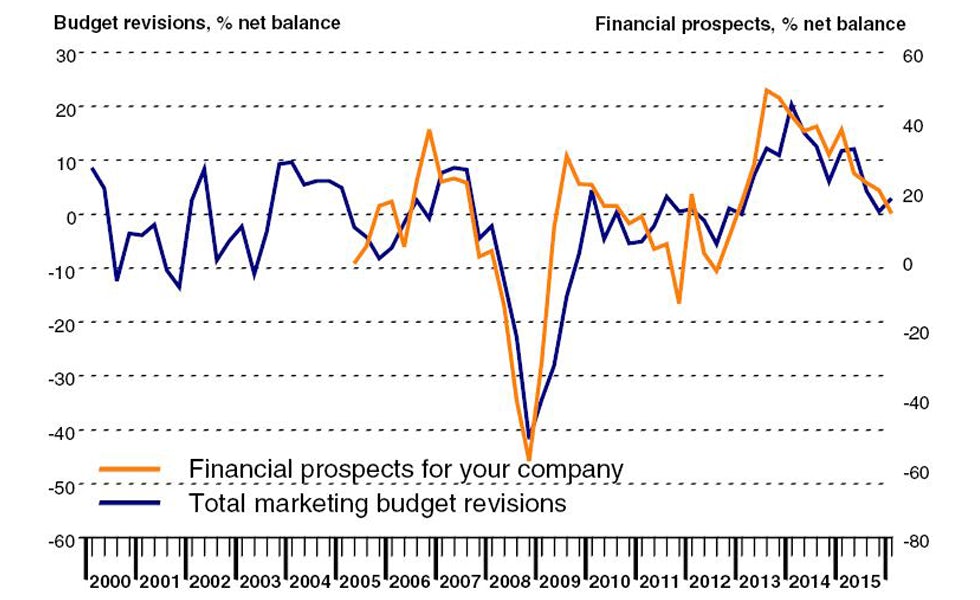 Just over a fifth of marketers (21%) recorded a rise in marketing budgets over the first quarter, while 18% registered a reduction. This meant that the balance of marketers saying they would be increasing their spend was at 3.0% this quarter – marking a rise from an 11 quarter low of 0.5% in the previous quarter.

Falling confidence is resulting in many companies cutting their marketing budgets, according to Paul Smith, senior economist at Markit and author of the Bellwether report.

He told Marketing Week: “There are a number of uncertainties on the horizon, not just a weaker economy but Brexit concerns as well. Within the next three months we will find out if the UK remains in the EU and while that uncertainty is around marketing executives are being asked to be cost-conscious and to squeeze budgets.”

“The report shows financial prospects are down and as a result marketing departments are often the first to take cuts.”

As a result of these concerns, Smith said brands are straying away from above-the-line spend and pumping more money into digital advertising. The Bellwether report found that marketers are focused on maximising effectiveness and so have turned to digital channels where they have had “prior success”

This is reflected by the report, with the net balance for internet spend rising to +9.8%, a five-quarter high, for the first quarter of 2016. 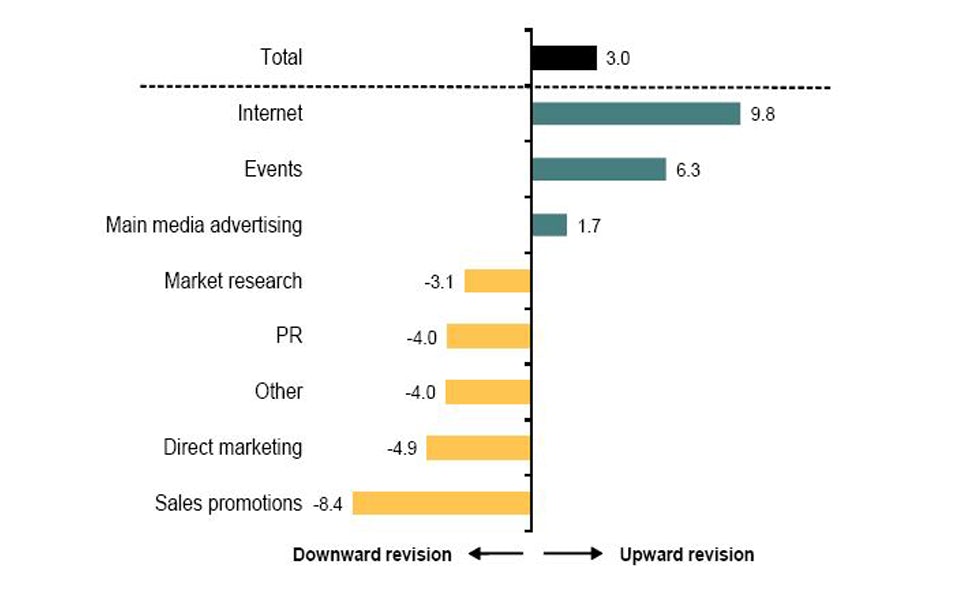 That comes amid a wider increase in digital marketing spend, with a new study from the IAB and PwC finding that the digital marketing industry was worth £8.6bn in the UK in 2014, up 16.4% year on year. Consumer good brands, in particular, are spending on digital, accounting for 18% of total spend, ahead of travel and transport on 13.4% and retail on 13.3%.

According to the IPA, this rise in digital spend comes at the cost of other forms of marketing. The net balance of marketers signalling a rise in sales promotions fell -8.4% and Smith says moves such as Sainsbury’s cutting multibuy deals reflect a “wider shift”.

Despite the economic and political concerns, Smith believes there are reasons for marketers to be positive. The IPA is predicting  a 3.3% growth in UK ad budgets for the year, while overall 23.3% of those questioned expect to spend more on advertising in 2016 than they did the previous year.

“We’ve had a sustained period of growth so it isn’t all negative. In fact, the overall macro environment is fairly reasonable and ad budgets will continue to grow even if that’s in different channels,” said Smith.

“Companies will face a period of uncertainty as it isn’t clear if the UK is to leave Europe or whether we’ll turn out like the Swiss with bilateral agreements in place with the EU. Staying in would boost the financial markets as they crave stability. So if we stay in it will be business as usual. But marketers are preparing for the scenario that we won’t and that caution is wise.”